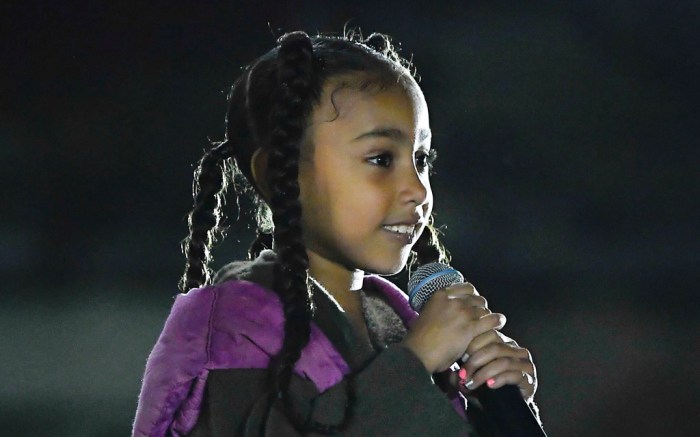 At Kanye West’s Yeezy Season 8 show in Paris tonight, all eyes were on North West.

The eldest daughter of West and wife Kim Kardashian closed the show on the runway alongside her dad. Standing onstage at the outdoor venue, she debuted an original song.

#NorthWest closes the #Yeezy show free-styling with her dad #KanyeWest at his #ParisFashionWeek show. 🎥: @shannonadducci

North was clad in a purple and black windbreak with a pair of wide-legged pants. On her feet, the 6-year-old sported a pair of oversize puffer boots in a gray colorway. Similar shoes were shown on several of the models in tonight’s show.

Meanwhile, West sported a tan jacket over a white T-shirt with a pair of gray Levi’s pants. For shoes, the rapper turned designer selected a pair of brownish shoes with a black outsole; the upper appeared to be fabricated from suede.

While tonight marked the first in-full look at the Yeezy Season 8 collection, Kardashian has been modeling styles from the range since the summer. The rapper had not shown on the runway since 2016; his previous shows were held in New York at Madison Square Garden and Roosevelt Island. In addition to the runway event, West brought his Sunday Service to Paris yesterday.

See styles on the runway at the Yeezy Season 8 Paris Fashion Week show.

Kanye West Wears the Unreleased Yeezy 451 in Paris — and It’s His Waviest, Most Avant-Garde Sneaker Yet