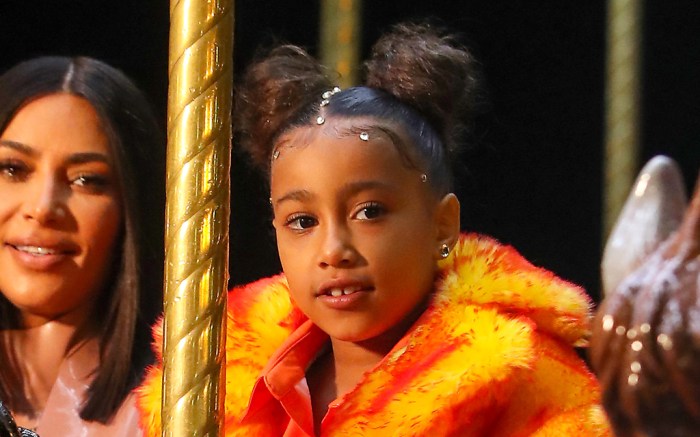 North West is already following in her parents’ fashionable footsteps.

The 6-year-old daughter of Kim Kardashian and Kanye West showed off her trend-forward style yesterday in Paris. North went with a monochromatic look, sporting a head-to-toe neon orange hue including a fluffy coat and what appeared to be a button-up jumpsuit.

For footwear, North, the oldest of four children, went with shoes from her dad’s popular collaboration with Adidas. She selected the Adidas Yeezy Boost 700 MNVN in the “Orange” colorway, which hit stores in Paris and Los Angeles only on Feb. 28. The kicks have a nylon upper with “700” branding and reflective accents; they boast a full-length Boost midsole and a rubber outsole.

Over the past few months, bold oranges have been trending, with stars including Rihanna, Kate Bosworth and Janelle Monae giving the colorway a go. Perhaps due to the look-at-me nature of social media, neons in general have been having a moment lately, with other popular options including hot pink and canary yellow.

While North went with a neon orange look for evening, she was clad in black earlier in the day, choosing a leather-like blazer and baggy pants. The outfit came complete with sleek Western boots.

The 6-year-old is expected to attend her father’s Yeezy Season 8 show in Paris today, alongside her mom as well as aunt Kourtney Kardashian and cousin Penelope Disick.

Kanye West Wears the Unreleased Yeezy 451 in Paris — and It’s His Waviest, Most Avant-Garde Sneaker Yet