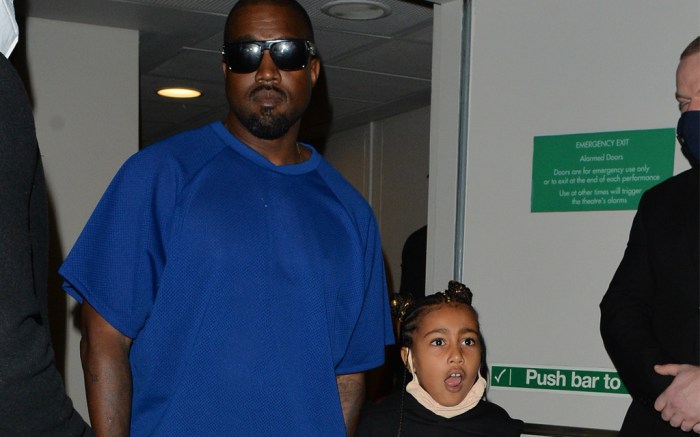 The rapper and his 7-year-old attended the British runway event this evening in their own unique looks. Kanye’s outfit included a blue oversize T-shirt with his signature shades and moto-style leather pants from Bottega Veneta. North, on the other hand, went for a more relaxed look in pants from her mom Kim Kardashian’s Skims line and an oversize hoodie reading “Vote Kanye” — an allusion to her father’s 2020 bid for the White House.

When it came down to footwear, North continued to support her father in shoes from his Adidas Yeezy line. The Yeezy Foam Runner in the “Ararat” colorway launched with a $75 retail price tag during a surprise drop in June. With comparisons drawn to Crocs’ classic clogs, the one-of-a-kind silhouette became a highly anticipated shoe thanks to its never-before-seen details and striking divergence from typical sneaker creations. Formed from a harvested algae foam, adult sizes of the aerodynamic shoes resell anywhere from $320 to $698 at StockX.com.

Adidas Yeezy is one of the Kardashian-West kids’ favorite labels for footwear. They own a mix of sneakers in mini versions from their dad’s lineup of must-have shoes, mixed in with North West’s affliction for a bold footwear moment. Already at such a young age, she is following in her family’s stylish footsteps as seen through a series of bold cowboy boots, fuzzy neon sandals and standout accessories.

As for Kanye himself, the rapper surprisingly didn’t wear footwear from his own line and instead selected boots from the brand of the evening, Bottega Veneta. The BV Tire boots feature a signature lug sole with smooth leather uppers and a Chelsea boot silhouette. Coming in a variety of colorways, the “Jesus Is King” musician selected the Black Transparent iteration that retails for $1,150 on the brand’s website.

West himself first joined forces with Adidas in 2015 and has since created an endless series of Yeezy footwear styles that oftentimes sell out within hours if not minutes. Before that, the rapper dropped two different Air Yeezy sneakers through a limited partnership with Nike.