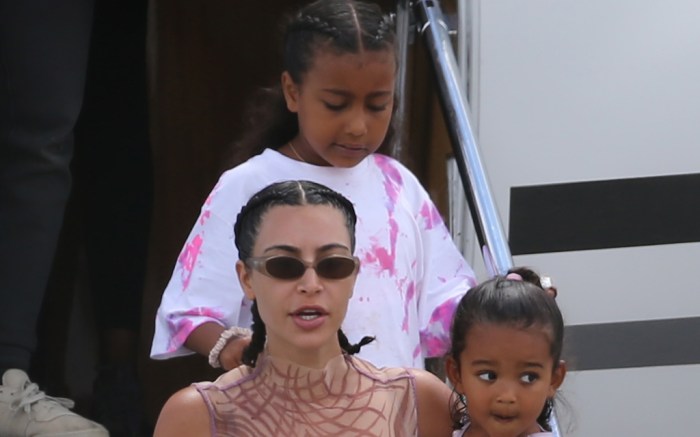 Kim Kardashian’s daughters came together for the cutest photoshoot.

North West, 7, and Chicago West, 2, posed this morning on a wooden fence in two very unique outfits, as shared by their mother on Instagram. While Chicago modeled a blue t-shirt and cream overalls, North opted for a black tank top and a kids-sized version of her mom’s Skims Cozy Knit pants; adult pairs retail for $88 at Skims.com.

For footwear, North continued her love for western-style silhouettes in a neon pink and brown leather pair; the style echoes a $47 design from Old West, available at Zappos.com.

My girls wanted to do a photo shoot together sitting up on this rail. Swipe to the right to see how it ended 🤣🤠🥰

As for Chicago, the toddler modeled a pair of sandals from her dad Kanye West’s Yeezy line. Her Yeezy Slides are in the “Bone” colorway with the infant silhouette including the style’s distinctive shark-tooth sole, along with a thick upper band, finished by an adjustable back strap for stability.

The styles originally were released in December 2019 but recently rereleased at YeezySupply.com in three colorways. The adult and the infant sizes are both currently sold out across the market; though they once retailed for just $35, you can now find the infant silhouette on StockX.com anywhere from $179 to $249.

Adidas Yeezy is one of the Kardashian-West kids’ favorite labels for footwear. They own a mix of sneakers in mini versions from their dad’s lineup of must-have shoes, mixed in with North West’s affliction for a bold footwear moment. Already at such a young age, the 7-year-old is following in her family’s stylish footsteps as seen through a series of bold cowboy boots, fuzzy neon sandals and standout accessories.

‪Happy 7th Birthday to my first born baby North! I can’t believe you are 7. Crazy how time has flown by so fast like this! You are everything and more than I ever dreamed of! The most stylist creative Gemini performer ever! I love you to your alien planet and back! ‬

Click through the gallery to find more occasions where the Kardashians rocked their Yeezy pieces.