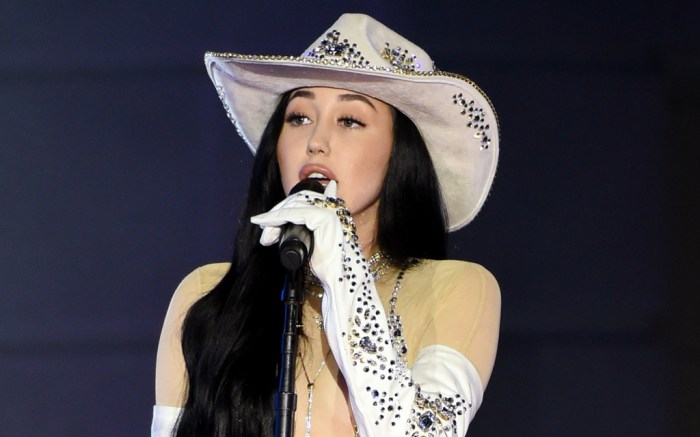 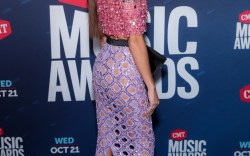 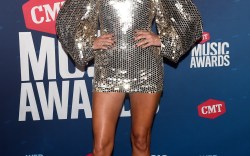 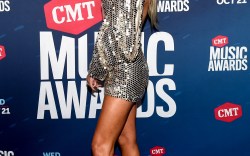 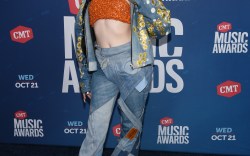 When it comes to Miley Cyrus’ younger sister, Noah Cyrus, the two have one style theme in common: go big or go home.

Tonight, the 20-year-old singer took the 2020 CMT Music Awards stage alongside Jimmie Allen for an unforgettable performance and an unforgettable look. Her on-set outfit included a deceivingly nude catsuit topped off with a glittering “thong” accent and a bralette. She accented the look with embellished white gloves and a matching cowboy hat to top things off.

As for Noah’s footwear, the boldness continued with her choice of thigh-high white boots capped off with a tall heel and chain buckled detailing at the ankle.

Ahead of her performance at the show, Noah Cyrus walked the red carpet in classic country style.

The singer showed off her roots in a cowgirl-chic look. The outfit included denim on denim, from her embellished jacket to paneled jeans to her tailored hat — all contrasted by a glittering orange crop top.

The denim didn’t stop at her attire, either. Cyrus continued the theme of the looked down to her pointed-toe boots. The Western-inspired pair came with jean-like uppers contrasted by a black patent cap toe finish, all set atop a lifted block heel.

The CMT Music Awards air live tonight at 8 p.m. ET on CMT with simulcasts on MTV, MTV2, Logo, Paramount Network, Pop and TV Land. Celebrating the best in country music, the show serves as the only major fan-voted award ceremony in the industry.

In light of the current health climate, tonight’s event will be held with proper social distancing in Nashville featuring outdoor performances across the city. Serving as co-hosts are Sarah Hyland, Ashley McBryde and Kane Brown as they lead the star-studded pack of singers and presenters featured in tonight’s lineup — think Taylor Swift, Diplo, Katy Perry and more amongst show veterans like Luke Combs, Little Big Town and Shania Twain.

Click through the gallery to see more stylish red carpet arrivals at the 2020 CMT Music Awards.