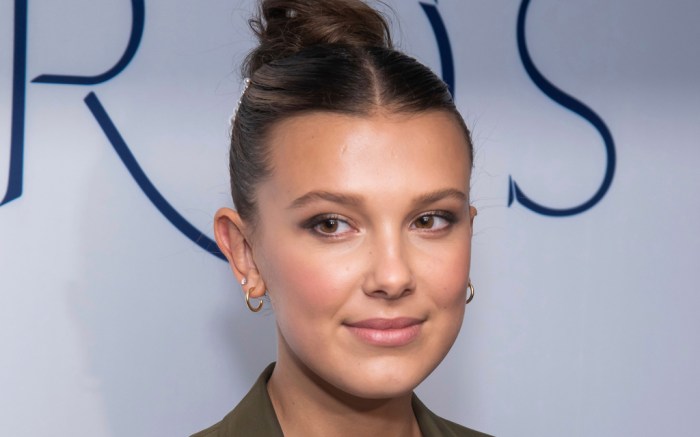 Millie Bobby Brown may be a big-name star, but when she’s not on duty, her style is pretty similar to any other teenager.

The 16-year-old “Stranger Things” actress opted for a comfy-chic look as she showed off a new bicycle from Moncler’s collaboration with Mate. She sported a slightly cropped white tank top teamed with gray sweatpants, accessorizing the outfit with glasses from her collaboration with Vogue Eyewear as well as a hair scrunchie.

For footwear, the “Once Upon a Time in Wonderland” alum selected all-white Nike Air Force 1s. The sneakers feature a premium leather upper, a padded mesh interior and Air cushioning in the midsole. The silhouette retails for just $90 and is available for purchase on Nordstrom.com.

Originally released in 1982 as a basketball sneaker, the Air Force 1 has become a go-to lifestyle shoe — winning over plenty of teenagers among its fans these days, along with “It” girls such as Emily Ratajkowski, Hailey Baldwin, Madison Beer and Kendall Jenner. The AF1 has also been a canvas for plenty of Nike collaborators, among them Off-White designer Virgil Abloh as well as hip-hop star Travis Scott.

Brown got her hands on the Moncler bike early — she received it as a gift from the brand — as the flashy style doesn’t release to the general public until November 2020. It can be pre-ordered now, but may be well outside of the typical teen’s reach due to its $3,600 price tag.

Brown’s fashion credentials are already plenty impressive. The Emmy Award nominee has partnered with Converse on two capsule collections, the most recent of which debuted in November 2019, offering reimagined takes on the Chuck Taylor and Chuck 70 silhouettes. In addition to being a Moncler partner — she has worked for a couple of years with the luxury label that gifted her the bike — Brown has also been linked with Calvin Klein. What’s more, she has ties to the beauty space, having launched her Florence By Mills skincare and makeup brand in 2019.

While Brown certainly has a fashion sense of her own, she works with a celebrity stylist, Thomas Carter Phillips, to put together her red carpet looks. Other clients of Carter Phillips’ include Danai Gurira, Emmy Rossum and Eliza Scanlen.

Into Brown’s outfit? Get a similar look without breaking the bank by shopping the styles below.