Miley Cyrus Is More Daring Than Ever in a Graphic Tee, Sheer Tights & 7-Inch Platforms 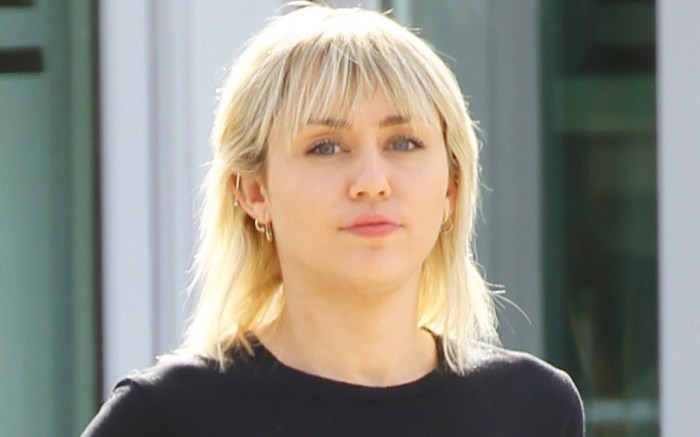 Miley Cyrus may have just debuted one of her most unexpectedly daring looks to date today.

The “Plastic Hearts” singer unveiled the lyric video for her newest single featuring an accumulation of fan videos with her own surprise appearance in the end. In the final clip that was also shared on her TikTok, Cyrus could be seen strutting her way down a hallway in a daring look that teamed a black graphic tee with sheer tights and standout boots.

This lyric video is a love letter to all of you superstars who made #PlasticHearts a viral phenomenon. Out now!

The lifted pair came set atop a studded platform with a coordinating block heel that measures a whopping 7 inches in height. Set with a mix of silver and black uppers, the design bears resemblance to Harris Reed x Roker’s standout platform boots that come coated in shimmering crystals. Titled The H silhouette, the design also features a corset-inspired lacing system along with crinkle-effect uppers; you can shop Cyrus’ boots for $2,816 at Matches Fashion.

Platform boots are a staple in Miley Cyrus’ footwear rotation for everything from music videos to off-duty style and surprise appearances. Last week, for example, the “Midnight Sky” singer gave her twist on a cheerful look as she joined the NFL Network as part of its Artist Takeover series this week.

Taking to Instagram to preview her appearance, Cyrus transformed into an edgy cheerleader in a varsity-style latex leotard with matching hot pink pompoms to tout. Giving the outfit a very on-brand touch, Cyrus then slipped on a set of over-the-knee latex boots; the style came set atop a sky-high platform base with a chunky block heel that appeared to measure around 5 inches in height. The boots also highlight an embellished top panel accented with a coordinating pink band for a pop of color.

While Cyrus herself is best known for her hit albums and box office films, she also dips her toes in the fashion and shoe space. The “Hannah Montana” star made an appearance on the runway at the Marc Jacobs’ fall ’20 show and has also sat front row at shows for top labels such as Tom Ford and Saint Laurent. She also has worked with Converse on a series of pride-filled shoe collections.

Finding yourself inspired by Miley Cyrus’ wild boots? Elevate your style in these next platform pairs.

Click through the gallery to discover more of Miley Cyrus’ best and boldest looks throughout her wild style transformation.