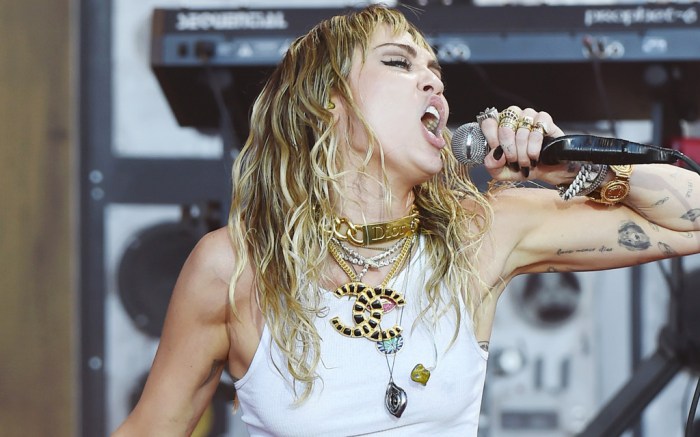 Miley Cyrus rocked the house last night during her virtual performance that was part of the Save Our Stages Music Festival, an event benefitting independent music venues across the country.

The “Midnight Sky” singer performed at the Whisky A Go-Go in LA wearing an all-black outfit complete with a wide-brimmed hat, fuzzy sweater and boots that climbed up to her thighs. Underneath her sweater, the star opted for a blinged-out t-shirt dress with cutouts on the side and silver accessories.

During her three-song set for the virtual benefit, Cyrus covered classics such as “Zombie” by The Cranberries and “Boys Don’t Cry” by The Cure. This was the second performance the Disney Channel alumnus took part in this week, following her Backyard Sessions for MTV Unplugged on Friday, which FN reported she teased earlier this month.

The actress and singer performed several hits including songs from Britney Spears and a duet with her sister, Noah Cyrus.

@noahcyrus sanggggg the house down last night! proudest big sister ever. i love u soooo much. 🖤

Cyrus, who has had many phases over the years as a performer, continues to rock the edgy-glam style she’s been wearing as of late, complete with a shaggy blonde mullet. Even in the middle of a pandemic, she’s been grabbing for statement shoes such as stilettos, platforms and thigh-highs for performances and campaigns.

Earlier this week, “The Last Song” star shared a photo of herself on Instagram in a pair of purple stilettos and encouraged her fans to get out the vote.

Want to edge up your wardrobe for fall? Take a look at a few pairs of shoes inspired by Miley Cyrus’ latest stage look.

Click through this gallery to see Miley Cyrus’ style evolution over the years.