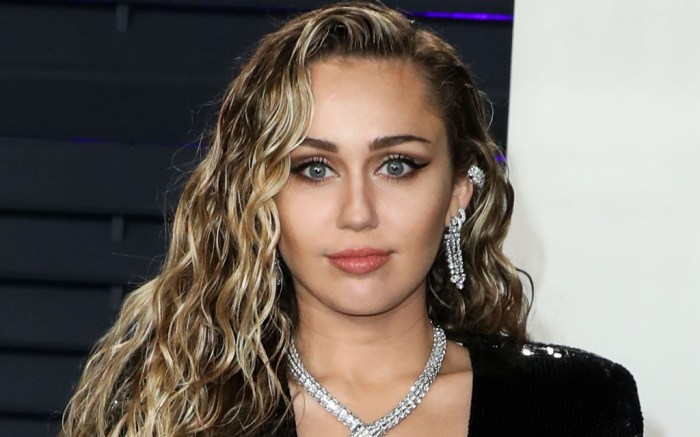 Miley Cyrus made headlines this weekend for her must-see MTV special that included a mix of hit songs and stylish looks.

For one of the performances during her ‘Backyard Sessions,’ the “Midnight Sky” singer performed her cover of “Communication” by The Cardigans in a bold number. The outfit included a plunging, 1970s-style gold dress coated in a snakeskin texture with a metallic loop ring holding it all together.

On her feet, Cyrus then elevated the standout outfit with classic black thin-strap sandals set atop a towering stiletto heel.

From my middle school gym locker room to backstage on timeless tours you could always find me listening to @thecardigansofficial it was a privilege to perform Communication for BYS unplugged. These words are even more relevant to me now at 27 years old.

Throughout the MTV special, the 27-year-old star continued to show off her standout style and impressive vocals. The looks ranged from glittering gowns layered over fishnet tights to leather trousers teamed with a semi-sheer blouse. As for performances, the singer covered both her own hits as well as songs from Britney Spears, Pearl Jam and even her own sister Noah Cyrus’s own track.

@noahcyrus sanggggg the house down last night! proudest big sister ever. i love u soooo much. 🖤

Give your ensembles the ultimate boost with sandals inspired by Miley Cyrus’ towering pair during her MTV special.

Click through the gallery to see Miley Cyrus’ impressive style evolution over the years.