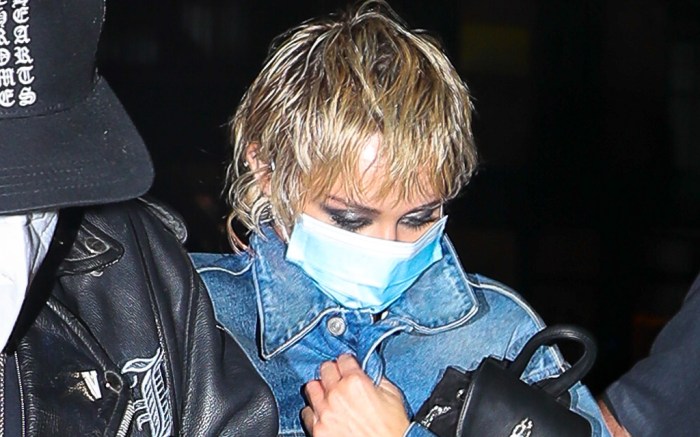 Miley Cyrus pulled off what is known as a Canadian Tuxedo in the fashion world after leaving a set post-filming with Dua Lipa.

The “Midnight Sky” singer arrived back to her hotel in New York last night matching a 1990s-style denim jacket to baggy mom jeans and a slew of black purses.

The denim-on-denim style is considered a Canadian Tuxedo in the fashion realm; the legend of the look originated in the 1950s when American musician Bing Crosby chose an all-jean Levi’s outfit instead of a suit at his hotel in Vancouver. Levi’s then coined the term along with a custom denim tuxedo for Crosby, according to the CR Fashion Book.

As for footwear, Cryus found a perfect bootie for fall; the sleek patent style includes a unique toe design that incorporates trending square-toe silhouettes in a subtle way, all set atop an easy-to-wear block heel. The pair comes from Haava, titled the brand’s “Texas” boot; the buckled shoe retails for $515 at HavvaMustafa.com.

The former “Hannah Montana” star showed off another pair of square-toe boots back in September whilst running out for a hair cut in Los Angeles. Her outfit then included a slouchy gray tank top matched to ash gray wide-leg trousers; she also accented the look with retro yellow shades, boho-chic jewelry and an animal-print tote bag.

Click through the gallery to discover more impressive moments from Miley Cyrus’ style evolution over the years.