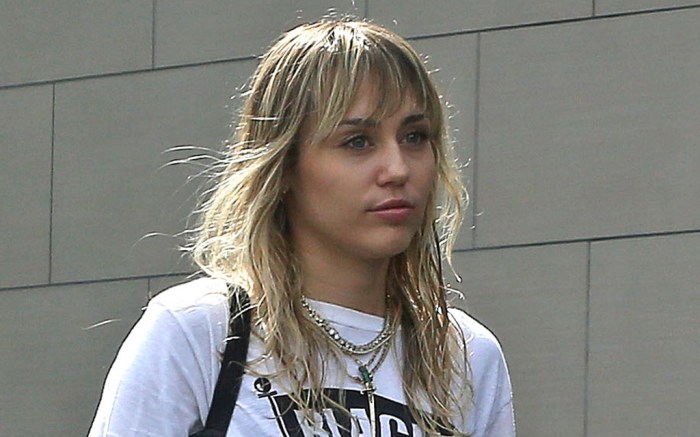 Miley Cyrus brought out her signature edge for her new single with Dua Lipa.

To build excitement for their new song “Prisoner,” Cyrus took to Instagram to show off the new and bold album artwork including her daring look for the shoot. The “Hannah Montana” alumna’s outfit included a cropped white tank layered over a black bralette with a matching lace-up black Saint Laurent leather corset. The pieces came adorned with a few chain necklaces, a Versace tiger-stripe coat and fishnet tights.

Fishnet tights are a surefire way to add a bit of flair and edge to an ensemble; the legwear silhouette is a favorite of Cyrus herself as well as Gwen Stefani, Lady Gaga and Cardi B among other stars.

As for footwear, the “Midnight Sky” singer opted for sky-high Vivienne Westwood platforms with a lace-up silhouette, patent leather uppers and a flared heel appearing to measure over 5 inches in height; similar designs retail for $1,140 on the brand’s website.

Rumors first flew around a duet between Cyrus and her British counterpart when the “Hannah Montana” alumna shared an image of them together in a recording studio in August. In the photo, the former Disney Channel star continued her signature edgy look as she showed off her mullet haircut in a white tank top, striped black and white pants and layered chain jewelry; she finished off the bold ensemble with patent leather pointed-toe booties.

For a twist on Miley Cyrus’ edgy look, try out these lace-up heels for size.

Click through the gallery to see more of Miley Cyrus’ incredible style transformation throughout the years.