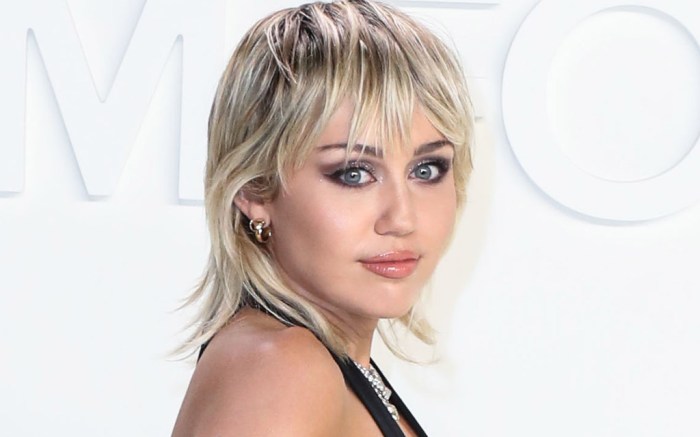 Miley Cyrus gave her twist on a cheerful look as she joined the NFL Network as part of its Artist Takeover series this week.

Taking to Instagram to preview her appearance, the “Midnight Sky” singer transformed into an edgy cheerleader in a varsity-style latex leotard with matching hot pink pompoms to tout.

Giving the outfit a very on-brand touch, Cyrus then slipped on a set of over-the-knee latex boots; the style came set atop a sky-high platform base with a chunky block heel that appeared to measure around 5 inches in height. The boots also highlight an embellished top panel accented with a coordinating pink band for a pop of color.

Throughout December, Miley has been promoting her new album “Plastic Hearts” across social media in a series of standout appearances and ensembles. Earlier this week, in fact, the former Disney Channel star channeled a familiar character as she teased a new mini video for her new song, “High.”

The Grammy-nominated star posed in a twist on Cinderella’s carriage from the 1950 film, going for a glam look in a furry gold coat. The metallic design echoed into her choice of jewelry and knee-high metallic boots, all layered over ripped sheer tights.

While Cyrus herself is best known for her hit albums and box office films, she also dips her toes in the fashion and shoe space. The “Last Song” star made an appearance on the runway at the Marc Jacobs’ fall ’20 show and has also sat front row at shows for top labels such as Tom Ford and Saint Laurent. She also has worked with Converse on a series of pride-filled shoe collections.

Inspired by Miley Cyrus’ sleek boots? Test out the style for yourself in these heeled designs.

Click through the gallery to take a look back through Miley Cyrus’ unbelievable style evolution throughout the years.