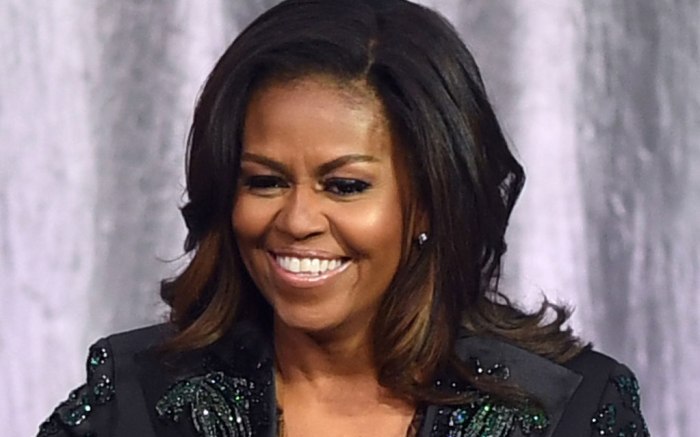 Michelle Obama went for the ultimate throwback in her latest Instagram post, choosing an image from her high school days.

The former first lady, 56, shared an image on Instagram from her prom night in 1982. In the photo, Obama sported a pink satin polka-dot dress with a matching jacket. The Princeton alum’s gown featured a leg-baring slit, however her shoes were not in the frame.

Throwing it back to my 1982 prom night and this pink satin, polka-dotted dress. If you're a student or teacher, join the #PromChallenge with @WhenWeAllVote and @MTV and tell us what your school is doing to register students to vote — you could get a free prom for your school! Learn more at prom.mtv.com. You can also help me spread the word by posting your prom photo with #PromChallenge.

The Harvard Law School grad encouraged students and teachers to join the #PromChallenge with When We All Vote and MTV. By explaining what their schools are doing to register students to vote, participants could win a free prom.

Throughout her time in the White House, Obama developed a reputation as a style icon, known for championing  American designers, particularly emerging talent. While living at 1600 Pennsylvania Ave., she wore styles from designers such as Jason Wu, Tracy Reese and Brandon Maxwell. She also worked some more affordable brands into the mix, including Target and Gap.

“As a black woman, too, I knew I’d be criticized if I was perceived as being showy and high-end, and I’d also be criticized if I was too casual,” Obama wrote in her 2018 memoir, Becoming. “I wanted to draw attention to and celebrate American designers, especially those who were less established, even if it sometimes frustrated the old guard, including Oscar de la Renta, who was reportedly displeased that I wasn’t wearing his creations.“

When it comes to footwear, Jimmy Choo has long been a favorite brand of Obama’s, particularly for classic pointed-toe pumps. Following President Donald Trump’s inauguration in 2017, the ex-first lady has opted for more trend-forward shoes, too, including sparkling gold Balenciaga thigh-highs worth nearly $4,000.

Since her husband’s campaign days, Obama has put together her outfits with the assistance of personal aide and stylist Meredith Koop. Of course, the attorney also has serious style chops of her own — and for proof, just look at her prom dress.

Click through the gallery to see more of Michelle Obama’s fashion.