Michelle’s Obama’s Defining Style at the Democratic National Convention: A Look Back 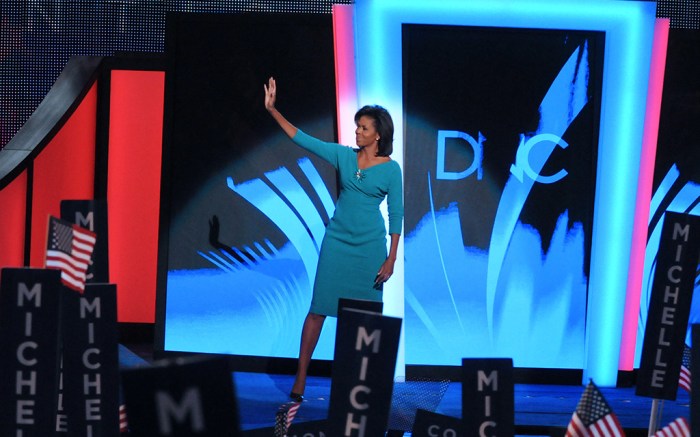 Former first lady Michelle Obama — who has been defining style at the Democratic National Convention since 2004 — will take the virtual stage on Monday at this year’s event.

The speech, which will reportedly be taped ahead of time at the Obamas’ vacation house in Martha’s Vineyard, Mass., will undoubtedly be one of the convention’s highlights and could attract one of the biggest audiences of the week.

The former first lady already enthusiastically endorsed the Democratic ticket on Instagram this week after Kamala Harris was nominated to be Joe Biden’s VP. “I am here for it all. Let us embrace and celebrate this moment,” she wrote on Instagram.

Obama has played a central role in rallying the country at her party’s conventions. One of her first big political appearances was during her husband’s breakout moment at the 2004 convention. Then-Senator Barack Obama delivered a much-buzzed-about keynote address to support John Kerry, the presidential hopeful that year.

Kerry, of course, went on to lose to incumbent George Bush, but Obama made a lasting impression that night — and his wife was beside him. She was dressed in a conservative white pinstripe suit with a skirt — and pearls.

Just four years later, in 2008, Barack Obama emerged as an unlikely candidate who quickly won the hearts of the the nation. For her first major convention speech in Denver, Michelle wore a short teal dress from Maria Pinto with an unconventional neckline. Her accessories include a large brooch accessory and simple pumps. With daughters Sasha and Malia Obama beside her, she was already proving to be a fashion trendsetter in those early days on the scene.

By 2012, the first lady was in a league of her own when it came to fashion influence.

For the convention in Charlotte, N.C. that year, she wore an attention-grabbing custom-made pink and gold silk dress by Tracy Reese with matching pink suede pumps from J. Crew, an accessible brand that she wore many times and helped make cool again. (By the time Obama left office, J. Crew started to lose its way again and went bankrupt earlier this year.)

In 2016, while still in office, the first lady stepped out in a Christian Siriano dress paired with Jimmy Choo’s Romy metallic pumps to give a memorable speech in support of Hillary Clinton.

The first lady, who often wore Choo during her time in the White House, invited Choo creative director Sandra Choi to the “Celebration of Design” event at the White House a few years earlier.

“That memory and experience will last with me forever and is something I am proud to tell my children about,” Choi recalled in an interview with FN.

Click through the gallery for more Michelle Obama style moments.