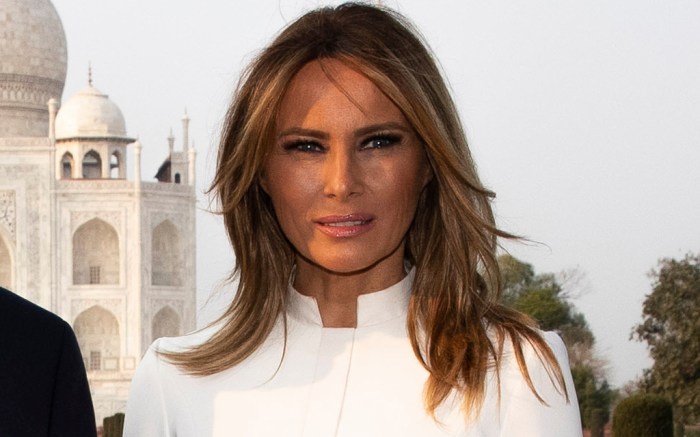 Melania Trump paid homage to old-school Indian craftsmanship with her ensemble as she and President Donald Trump arrived in Ahmedabad, India, on Monday for a two-day state visit.

The first lady sported a white jumpsuit from Atelier Caito for Hervé Pierre crafted in a cream-colored crepe. At the waist, Trump sported a sash made from vintage green silk with gold metallic thread. On Instagram, the designer said the sash was “cut in early [20th]-century Indian textile documents I found in Paris through very good friends who are collectors.”

Arriving in India, the First Lady #flotus is wearing a white jumpsuit from @atelier_caito_for_herve_pierre in crème crêpe . The sash was cut in an early XX century Indian textile documents I found in Paris through very good friends who are collectors. @herve_pierre_creative_director . The sash is made out of green silk and gold metallic thread . We used the border which was the most Interesting piece we could use as it was a vintage piece .

For shoes, the Slovenian American went with a pair of white pumps with a pointed toe. It’s uncertain which brand of footwear she was clad in, but Trump often chooses either Manolo Blahnik’s BB pumps or Christian Louboutin’s So Kate.

Meanwhile, the president wore a black suit with almond-toe black shoes. He accessorized with a yellow necktie. The Trumps are expected to visit three Indian cities during their two days in the country: Ahmedabad, Delhi and Agra. President Trump will engage in bilateral talks with Indian leadership while there.

On Sunday, the president and first lady were photographed exiting the White House. For her flight to India, FLOTUS wore a black coat over a turtleneck and black-and-white pants from Rachel Roy. For footwear, she selected Roger Vivier’s Belle Vivier flats.

If you’re into Trump’s white heel look but don’t want to break the bank, consider shopping one of the affordable alternatives we’ve rounded up below, all priced under $150.