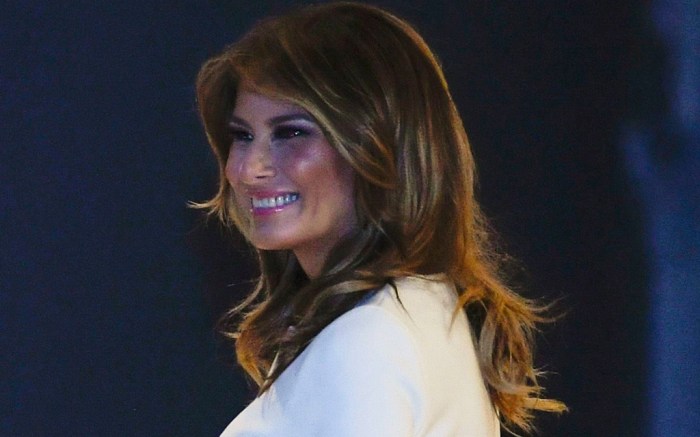 The first lady looked chic in a knee-skimming dress with elbow-length sleeves from Atelier Caito for Herve Pierre pre-fall ’20. The dress was done in patriotic hues, with a white base that featured navy and dark red stripes below the bust and at the trim of the sleeves.

For footwear, Trump opted for textured leather pumps that appeared to be a dark red colorway. A frequent wearer of stilettos, FLOTUS can typically be spotted in one of two pointed-toe pump styles: the Manolo Blahnik BB and the Christian Louboutin So Kate. It’s unclear whether she sported one of her go-to pairs for this evening’s festivities or decided to mix things up.

Meanwhile, the president stuck with his typical uniform: a dark suit, shining black shoes and a white button-down shirt. He accessorized with a red necktie and an American flag pin.

Aside from Louboutin and Manolo Blahnik, the first lady has also been spotted in luxe shoe styles from Victoria Beckham, Roger Vivier and Gianvito Rossi. More affordable choices of the Slovenian American’s include Adidas Superstar sneakers, Timberland workboots and Zara snake-print loafers.

Click through the gallery to see more of Melania Trump’s 2019 shoe style.