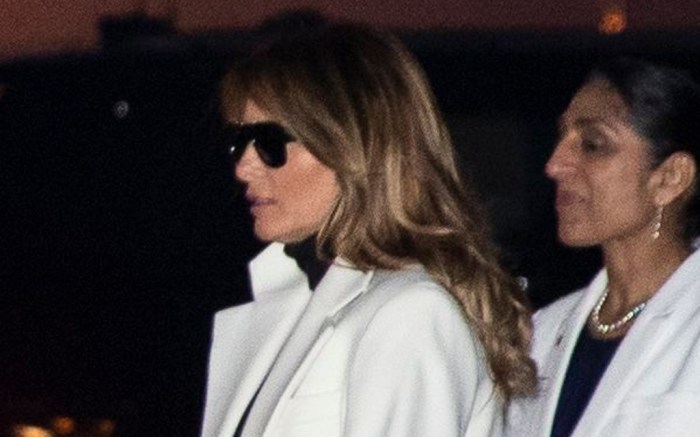 For her return, the first lady went with a black-and-white ensemble that was casual and stylish at the same time. Trump wore a white midi-length coat layered over a turtleneck and black skinny jeans.

On her feet, the Slovenian American sported a pair of buckled Dior combat boots. While combat boots never really go out of vogue, the style has been particularly popular this season, favored by “It” girls such as Kendall Jenner and Bella and Gigi Hadid.

The first lady has an impressive collection of footwear, but these Dior boots are actually a repeat. Trump was first spotted in the shoes for a February 2018 flight, teaming them with a black long-sleeved shirt and similar jeans to the ones she sported last night. The boots have since sold out everywhere.

Even though the Dior boots are flat, FLOTUS mostly chooses stilettos, with her go-to silhouettes being Christian Louboutin’s So Kate and Manolo Blahnik’s BB. She’s also sported heeled styles from the likes of Victoria Beckham and Gianvito Rossi.

Although Trump’s boots are no longer available, we’ve rounded up some chic options below to help you get a similar look to hers — and as an added bonus, prices start at just $28.