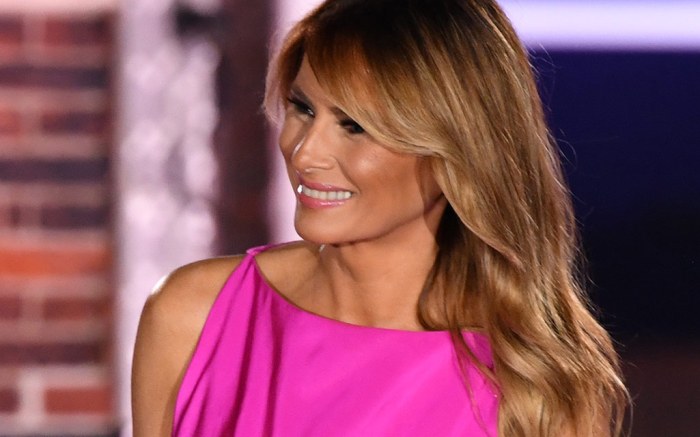 For the third evening of the Republican National Convention, Melania Trump pulled out all stops with a very modern cocktail ensemble. The American first lady stole the show in a vibrate fuchsia concoction.

The dress by Taiwanese-Canadian designer Jason Wu featured a full skirt that fell mid calf and a ruched waist that came cinched with a black velvet tie. In an unexpected twist, it fell to each side instead of meeting in the middle.

But while this sort of affair can often look too Shirley Temple by far, the frock in question succeeded due to its unexpected, non-traditional finish.

The elasticated waist and the fact that the tie stopped just short of a bow gave it a fresh, contemporary and age appropriate air.

The first lady accessorized with black velvet pumps by Manolo Blahnik which matched the belt. The two black accents also helped keep the look balanced and grounded. Wu and Manolo often collaborate on the former’s runway shoes so the pairing is not without precedent.

Although Trump’s frock is likely to have been custom made for her, fuchsia and black is also a key color combination for the Jason Wu Collection fall ’20.

When it comes to shoes, the former model is also a fan Christian Louboutin. She has pairs in various shades and patterns, often teaming looks in monochromatic style from head to toe.

The previous day the first lady embraced an altogether different look. She wore a military-inspired outfit with khaki blazer and matching skirt. The jacket comes from Alexander McQueen and costs $2,450.