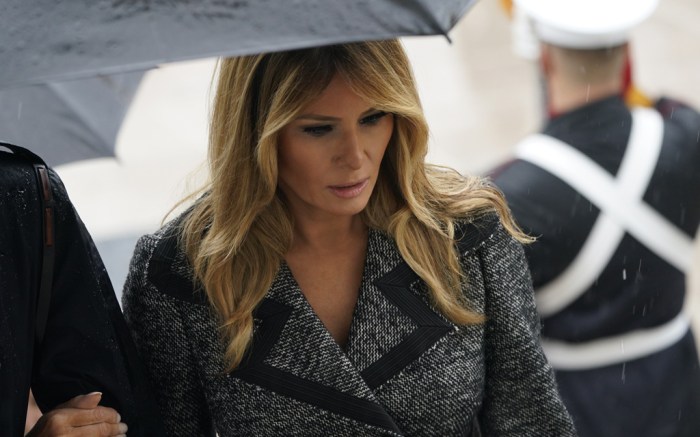 Melania Trump joined her husband, President Donald Trump, at the Tomb of the Unknown Soldier at Arlington National Cemetery in Arlington, Va., today for a wreath-laying ceremony to commemorate Veterans Day. Veterans Day is an American holiday observed annually on Nov. 11, honoring those who have served in the United States Armed Forces.

The first lady opted for a textured, knit black and gray coat dress for the solemn occasion. Despite continued COVID-19 infections within members of the White House, Melania and her husband both opted against wearing a face mask for the outdoor ceremony. The disputed decision to go maskless comes after both the president and the first lady’s own battle with the virus as well as the news last week that White House chief of staff, Mark Meadows, had tested positive for the coronavirus.

The first couple was also joined by the president’s eldest daughter, Ivanka Trump, who wore a gray trench coat over a black dress for the memorial service. The advisor to the president kept safe in a printed face mask and leather gloves as she included a wide-brim hat to finish the ensemble.

As for Melania Trump, though her shoes could not be seen in the images, the former model oftentimes prefers styles from two prominent brands in particular: Christian Louboutin and Manolo Blahnik. The first lady favors towering heels like Christian Louboutin’s signature So Kate 5-inch heels as well as Manolo Blahnik’s BB pumps, a classic design inspired by French style icon Brigitte Bardot. She has also been spotted in flatter styles from Roger Vivier and Dior. Her designer-filled selection of apparel as well includes pieces from Ralph Lauren and Gucci, as well as bespoke designs from her personal stylist, Herve Pierre, former creative director for Carolina Herrera.

Meanwhile, President-Elect Joe Biden and his wife Jill placed a wreath today at the Philadelphia Korean War Memorial. World leaders have extended congratulations to Biden, who was declared the victor of the presidential election last Saturday, however, Trump has refused to concede.

Click through the gallery to see more of Melania Trump’s looks throughout her time as the first lady of the United States.