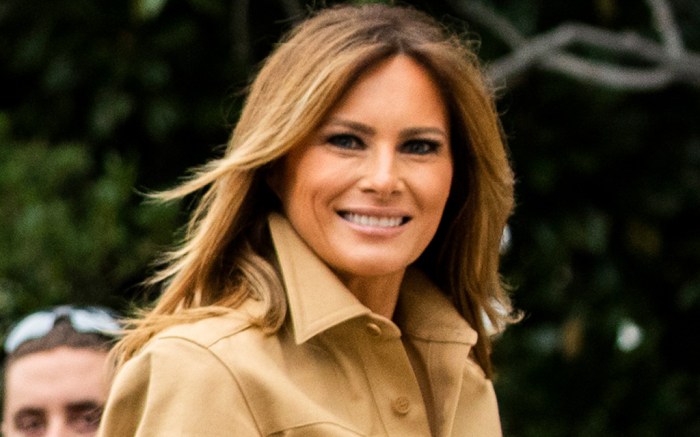 Melania Trump joined her husband President Donald Trump and son Barron Trump, 14, as they arrived back at the White House following a visit to New Jersey.

As they stepped off Air Force One, Melania debuted a fall-ready look ahead of the upcoming cooler season. Her safari-inspired dress came in a khaki shade with dual front pockets and a button-up finish. The first lady tied the outfit together with a brown knotted belt and a matching Hermès Birkin bag; similar totes resell anywhere from $19,140 to $31,950 on resale sites like World’s Best and Fashionphile.

The Slovenian native continued the neutral tones of her look with her choice of footwear. Her brown suede pumps came adorned with a pointed leather cap toe design and a tall stiletto heel. The design echoes Manolo Blahnik’s Irene dual-tone silhouette that comes in a mix of color combinations with a retail price around $925; Melania’s choice of colorway, though, has since sold out.

In addition to her cap-toe pair, the former model oftentimes favors towering heels like Manolo Blahnik’s BB pumps, as well as Christian Louboutin’s signature So Kate 5-inch heels. She has also been spotted in flatter styles from Roger Vivier and Dior.

At the end of July, at a White House meeting, the first lady broke out her go-to BB pumps teamed with a recycled jumpsuit that she debuted on a trip to Japan in 2019. The former model opted for a navy silk jumpsuit by Loro Pian with contrast white piping across the cuffs, legs and lapels; the design initially retailed for $3,500 but has since sold out.

For even more of Melania Trump’s stylish footwear, click through the gallery.