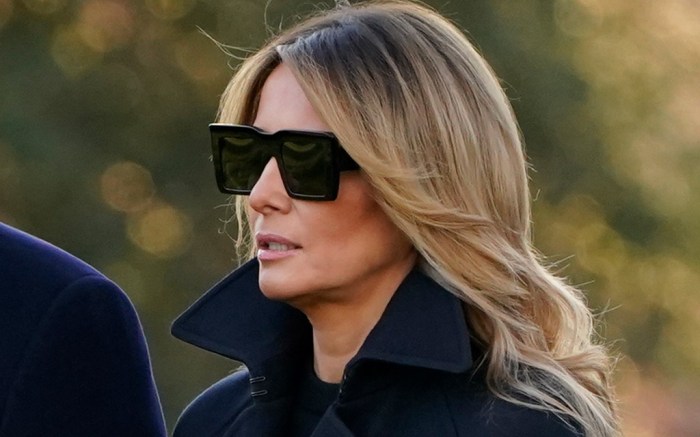 Melania Trump joined her husband, President Donald Trump, as they boarded Air Force One this afternoon, heading from the White House to his Mar-a-Lago estate in Florida. The first couple will spend Christmas in the southern state as they have traditionally done throughout President Trump’s term in office.

For the outing, the first lady opted for a double-breasted black coat dress with accentuated lapels and a flowing skirt. She accessorized the number with her signature square-frame sunglasses.

To counter the shorter hem of her winter-ready number, Melania opted for a sleek set of thigh-high boots from one of her most beloved footwear brands, Christian Louboutin. The red-bottom design featured slouchy Nappa leather uppers formed with exposed-stitched panels and a pointed-toe front. Titled the Eleonor Alta silhouette, the bottoms come set atop a sculptural 4-inch block heel for a heightened finish.

You can find Melania’s choice of bold footwear retailing for $2,195 at ChristianLouboutin.com.

When she isn’t in a heightened style, Melania Trump herself has also been spotted in flatter styles like her pair from Roger Vivier as well as shorter heels from Dior. Her designer-filled selection of apparel as well includes pieces from Ralph Lauren and Gucci, as well as bespoke designs from her personal stylist, Herve Pierre, former creative director for Carolina Herrera.

Style your skirts and dresses for winter with these over-the-knee boots.

Click through the gallery to discover more of Melania Trump’s statement footwear moments throughout her time as the first lady.