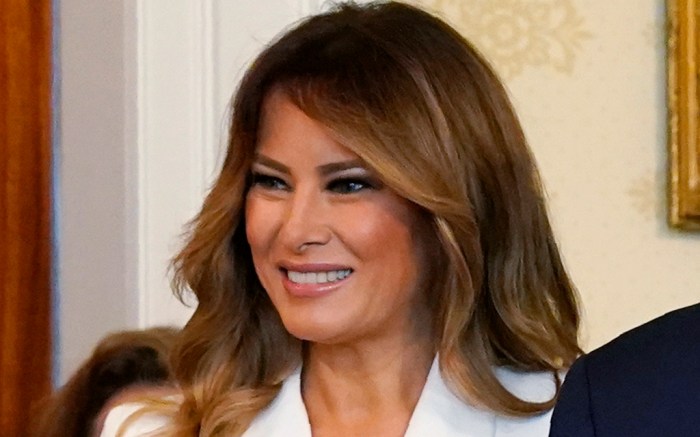 Melania Trump joined her husband, President Donald Trump, this morning as he signed a proclamation recognizing the 100th anniversary of the ratification of the 19th Amendment, which granted women the right to vote.

For the occasion, Melania joined fellow guests in wearing white, a color historically associated with the women’s suffrage movement. The first lady’s take on the symbolic shade came in the form of a wrapped blazer layered over a matching midi skirt and cinched together with a black and white gingham belt.

The same checkered print made its way onto Melania’s choice of footwear, a black and white patterned pump featuring a pointed-toe design and a lifted stiletto heel. The Manolo Blahnik BB pump silhouette is one of the former model’s boldest styles; she previously matched the now sold-out pair to a Michael Kors Collection jacquard coat dress when visiting Belgium in May 2017.

In addition to her gingham pair, the former model oftentimes favors towering heels like Manolo Blahnik’s Irene pumps, as well as Christian Louboutin’s signature So Kate 5-inch heels. She has also been spotted in flatter styles from Roger Vivier and Dior. On Sunday, the Slovenian native arrived back in Washington D.C. in cap-toe pumps from her favorite footwear brand after a trip to New Jersey with her husband and son Barron Trump, 14.

Matched to a safari-inspired dress and an Hermès Birkin bag, Melania’s brown suede pumps came adorned with a pointed leather cap toe design and a tall stiletto heel. The design echoes Manolo Blahnik’s Irene dual-tone silhouette that comes in a mix of color combinations with a retail price around $925; Melania’s choice of colorway, though, has since sold out.

Click through the gallery to find more of Melania Trump’s most statement-making pumps over the years.