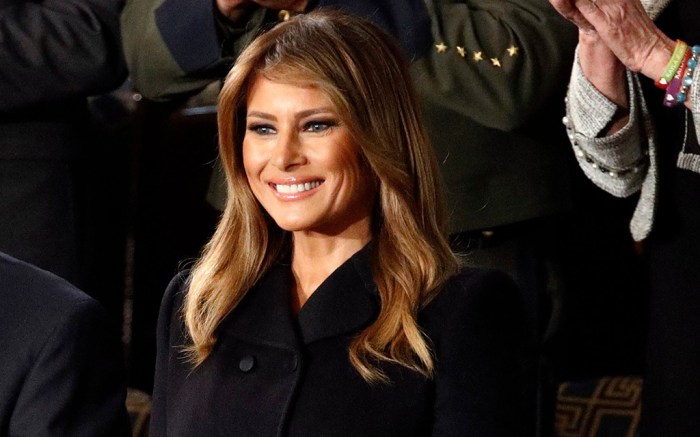 Melania Trump received a standing ovation tonight when she arrived on Capitol Hill for President Donald Trump’s State of the Union address.

Our stylish first lady embraced understated elegance for the eagerly anticipated event. The former model wore head-to-toe black, opting for a blazer and pencil skirt with pointy pumps on a soaring stiletto heel.

The shoe silhouette is a favorite of the first lady. She is often seen in several fabrications and colors of Manolo Blahnik’s BB pumps and Christian Louboutin’s So Kate styles.

President Trump expressed his gratitude for her Be Best program, an initiative to stop bullying and eradicate drug abuse. He also called on Melania to present radio host Rush Limbaugh with the Presidential Medal of Freedom, one of the nation’s highest civilian honors.

Other Trump women were present for the SOTU address, including his daughters Ivanka and Tiffany Trump, as well as his son Eric Trump’s wife, Lara. Ivanka, his eldest daughter and advisor, had on a sleeveless black dress with a red collar and matching pumps. Meanwhile Tiffany had on a blue dress with heels by Aruna Seth and Lara wore a camel-colored suit with pointy pumps.

Female lawmakers also made a statement through their clothing, using their outfits to draw attention to the 100-year anniversary of women’s right to vote in the U.S. White is a shade heavily associated with women’s suffrage: In demonstrations and parades in the early 20th century, activists would wear white dresses in hopes of getting their photos printed in the newspapers.