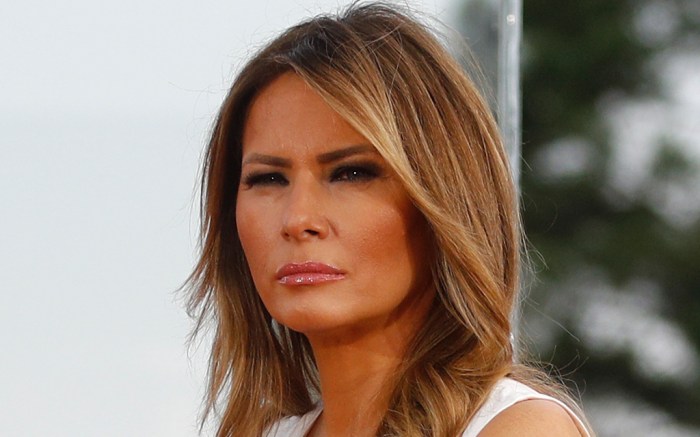 Melania Trump met with interns from the Congressional Coalition on Adoption Institute’s (CCAI) Foster Youth Intern Group yesterday to discuss ideas on how to improve the foster care system.

Held through a virtual roundtable, the first lady shared footage from the event on her Instagram page; the Slovenian native led the discussion from the head of the table. She opted for gray tweed sleeveless dress for the event, seated alongside Health and Human Services Assistant Secretary Lynn Johnson as well as other administration officials.

Yesterday I held a virtual roundtable with the @CCAInstitute #FosterYouth Intern Group. We discussed their ideas to improve #FosterCare policy & proposals for child welfare advocates across the country. Thank you for your efforts to raise awareness to policymakers. #BeBest

Though her shoes could not be seen in the images, the former model oftentimes favors towering heels like Manolo Blahnik’s BB pumps, as well as Christian Louboutin’s signature So Kate 5-inch heels. She has also been spotted in flatter styles from Roger Vivier and Dior.

Last week, at a White House meeting, the first lady re-wore a jumpsuit that she debuted on a trip to Japan in 2019. The former model opted for a navy silk jumpsuit by Loro Pian with contrast white piping across the cuffs, legs and lapels; the design initially retailed for $3,500 but has since sold out. Trump styled the jumpsuit with a narrow white belt and her go-to Manolo Blahnik BB pumps in a matching colorway.

You can find similar styles from the brand at Nordstrom.com, available to shop for $625 and up, depending upon colorway, height and fabrication.

Click through the gallery to see even more of Melania Trump’s statement-making footwear style.