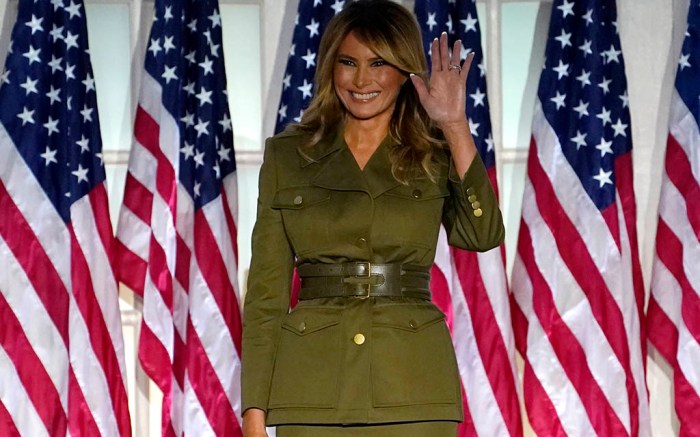 Tonight, Melania Trump closed the Republican National Convention’s second day from the Rose Garden of the White House. The first lady embraced a military-inspired outfit that included a deep green blazer with a matching skirt; the jacket comes from Alexander McQueen and holds a $2,450 price tag on the brand’s website.

While it was hard to see her shoes behind the podium, observers of the president’s wife’s style know it would be no surprise if the outfit was completed with a set of soaring heels. The former model is fond of pointy stiletto pumps by Christian Louboutin and Manolo Blahnik. She has pairs in various shades and patterns, often teaming looks in monochromatic style from head to toe.

Green on green was Melania’s color of the night, but President Donald Trump’s daughter opted for a color that paid tribute to her name in Tiffany-blue. Tiffany Trump, his youngest daughter, earlier took to the podium wearing a blazer over a sparkling, embellished blouse. Her trousers incorporated flared legs that were split at the side.

The four-night event concludes Thursday with remarks from Ivanka Trump.