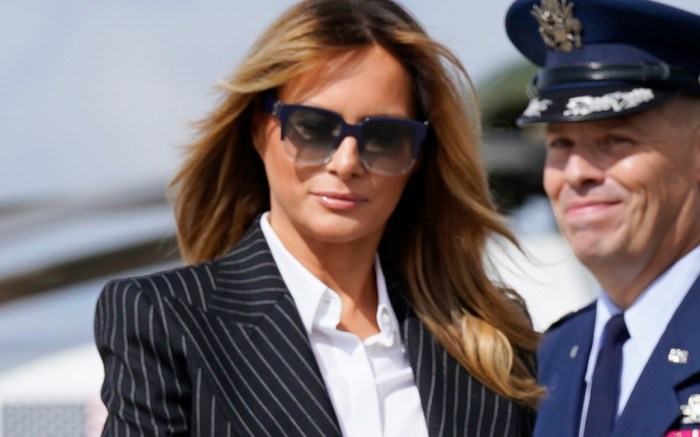 Melania Trump joined her husband, President Donald Trump, today as the duo departed the White House and headed to the first presidential debate in Cleveland today. The president will be taking on the Democratic nominee Joe Biden in a debate moderated by Fox News anchor Chris Wallace.

As the first couple headed to Andrews Air Force Base, Melania showed off her tailored attire in a black and white pinstripe suit layered over a white button-down blouse.

As for footwear, the first lady decided on a navy suede take of her most beloved pumps from Manolo Blahnik. When it comes to shoes, Trump is a fan of heeled styles, particularly the brand’s BB pumps, named after French midcentury-style icon Brigitte Bardot, along with the label’s Irene style. Similar colorways to Melania’s pick retail for $665 at Bergdorf Goodman.

Earlier this month, the former model paid a visit to Concord Hospital in Concord, N.H. to visit with staff and learn more about their treatment programs for babies born with Neonatal Abstinence Syndrome. She arrived at the medical center in a brown suede jacket worn as a shirt over taupe tailored cigarette pants and a snakeskin take on her BB heels.

I had a wonderful visit to @ConcordHospital yesterday to discuss their treatment programs for babies born w/ neonatal abstinence syndrome & the importance of communities coming together to create a safer, healthier, & more hopeful world for our children. #BeBest #RecoveryMonth

For Melania Trump, her pinstripe look today is just one of many statement outfit combinations in her closet. Her designer-filled selection includes pieces from Ralph Lauren and Gucci, as well as bespoke designs from her personal stylist, Herve Pierre, former creative director for Carolina Herrera. In addition to her blue suede pair, the former model oftentimes favors towering heels like the aforementioned Manolo Blahnik’s pumps, as well as Christian Louboutin’s signature So Kate 5-inch heels. She has also been spotted in flatter styles from Roger Vivier and Dior.

Click through the gallery to see more of Melania Trump’s top statement-making heels over the years.