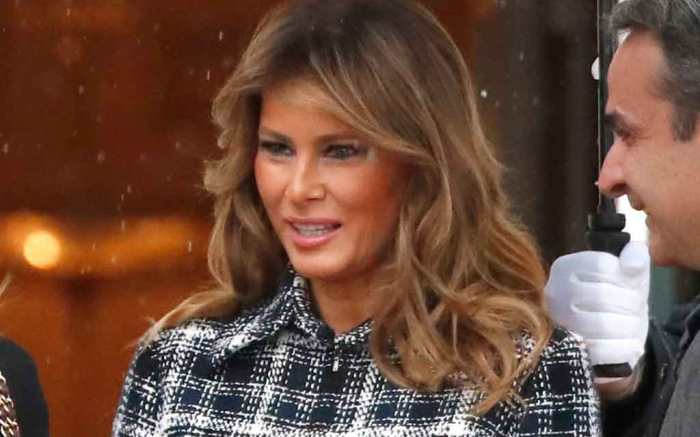 Trump wore a long-sleeved, collared black-and-white plaid jumpsuit from Chanel, which she belted at the waist. The jumpsuit appeared to be fabricated from bouclé.

On her feet, the first lady wore pointed-toe black boots set on a slim stiletto heel. The shoes appeared to be fabricated from suede.

Both President Trump and Prime Minister Mitsotakis suited up for their meeting, choosing navy suits and black dress shoes. Grabowski-Mitsotakis wore a brown jumpsuit under a dark coat, with pointed-toe brown heels completing her look.

The White House’s Twitter account shared a video from the meeting, with the caption: “President @realDonaldTrump spoke to the press at the top of his meeting with Prime Minister @kmitsotakis of Greece—a nation that has made a tremendous economic comeback!”

President @realDonaldTrump spoke to the press at the top of his meeting with Prime Minister @kmitsotakis of Greece—a nation that has made a tremendous economic comeback! pic.twitter.com/aJEopAgr8d

When it comes to shoes, Trump loves stilettos, particularly two styles of pointed-toe pumps: Manolo Blahnik’s BB and Christian Louboutin’s So Kate. The first lady has been spotted in boots in recent years from brands such as Gianvito Rossi, Victoria Beckham and Louboutin. She has also occasionally worn more accessibly priced footwear, including the Adidas Superstar, the Adidas Stan Smith and Timberland work boots.

Click through the gallery to see Melania Trump’s best shoe style of 2019.

Melania Trump Sparkles in a $4.7K Givenchy Gown for New Year’s at Mar-a-Lago