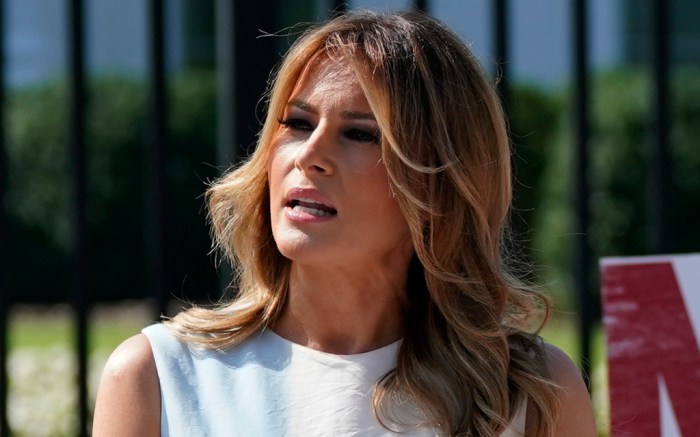 Melania Trump visited an exhibit of art honoring the 100th anniversary of the 19th amendment in front of the White House today, celebrating a century of women’s suffrage. The “Building the Movement: America’s Youth Celebrate 100 Years of Women’s Suffrage” initiative brings together pieces of art created by youth from all 50 states and the District of Columbia.

As she looked at the art created by young constituents, the first lady took a moment to address the crowds and press in honor of the anniversary. Melania went for a bright number for the occasion, modeling a white and neon orange floral midi dress.

As seen in a video of the event shared by the official White House Twitter account, the former model elevated the colorful dress with bright orange pumps from Christian Louboutin. Set atop a towering 5-inch stiletto heel, the suede pair is yet another iteration of Melania’s beloved So Kate pumps from the French brand. The style includes a pointed-toe front and a rounded vamp, all atop a signature red outsole. Though the tangerine colorway has since sold out, you can find similar suede styles available for $659 at Net-a-Porter.com.

In addition to the new art exhibit, Melania Trump honored the centennial anniversary of women’s right to vote once more as she joined her husband President Donald Trump last week for the signing of a proclamation recognizing the anniversary of the ratification of the 19th Amendment. For the event, the Slovenian opted for an all-white look with a gingham belt and matching gingham pumps from Manolo Blahnik.

In addition to her orange and gingham pairs, the first lady oftentimes favors towering heels like Manolo Blahnik’s Irene pumps, as well as the brand’s BB pump silhouette. She has also been spotted in flatter styles from Roger Vivier and Dior. Beyond designer footwear, Melania’s dress collection isn’t lacking in major labels either. It includes pieces from Ralph Lauren and Gucci, as well as bespoke designs from her personal stylist, Herve Pierre, former creative director for Carolina Herrera.

Flip through the gallery to find even more times Melania Trump made statement-making footwear choices.