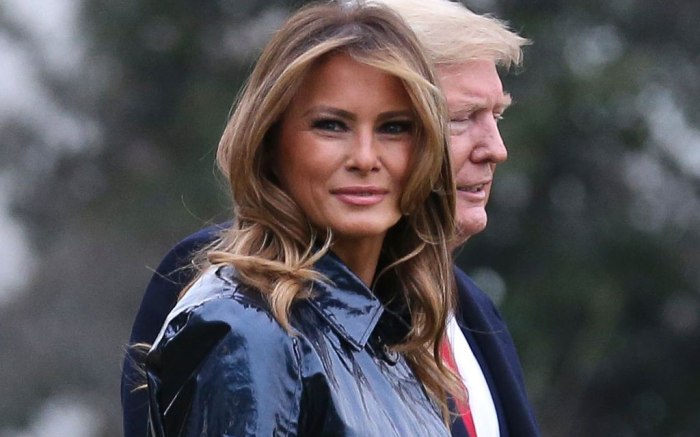 Melania Trump’s football-watching outfit probably has higher heels than yours.

The first lady was photographed this afternoon en route from the White House to New Orleans for the College Football Playoffs National Championship wearing her signature stiletto heels.

Trump bundled up in a shiny Theodore Scanlan trench coat made of patent leather. The piece retails on the brand’s website for $2,000. Black leather and trench coats were both in vogue in the ’90s, favorites of “It” girls such as Naomi Campbell and Kate Moss. The shiny finish on Trump’s coat, which appears metallic from a distance, offered an eye-catching touch.

For shoes, the former model selected sky-high boots that appeared to add around 4 inches of height to her 5-foot-11 frame. This time, she reached for a pair of black boots with an almond toe, a slender heel and a suedelike upper. The boots appeared to be from Prada, one of Trump’s go-to labels for ready-to-wear.

When it comes to footwear, Trump has two favorite styles: the Manolo Blahnik BB and the Christian Louboutin So Kate, both of which are pointed-toe, stiletto-heeled pumps. Over the past few months, she has also been spotted in shoes from Victoria Beckham, Gianvito Rossi and Zara.

This year’s College Football Playoffs National Championship matchup is between the Louisiana State Tigers and the Clemson Tigers. The game begins at 8 p.m. ET and is being broadcast on ESPN.

Flip through the gallery to see Melania Trump’s 2019 shoe style.

Melania Trump Sparkles in a $4.7K Givenchy Gown for New Year’s at Mar-a-Lago