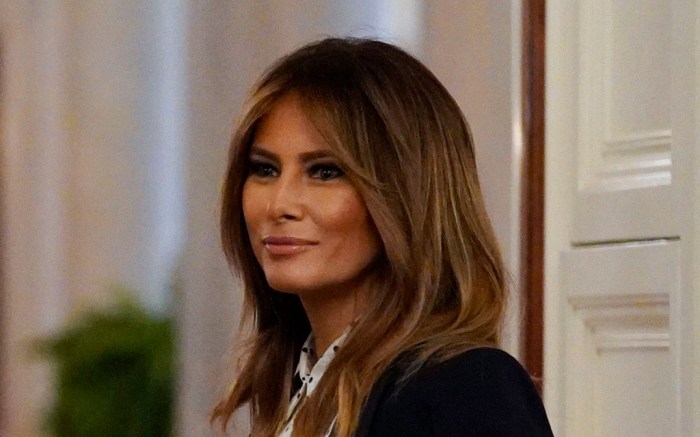 The first lady was joined by students from Cornerstone Schools in Washington D.C. for a movie session in the White House theater to watch the film “Hidden Figures” and to speak with Smithsonian National Museum of African American History and Culture about “the vital role African American women played in the NASA space program,” according to her Instagram caption.

For the occasion, Trump chose a $1,290 black and white polka dot Gabriela Hearst blouse, a black $1,395 Michael Kors blazer and a matching black pencil skirt. On her feet she wore one of her favorite brands of footwear: Christian Louboutin. The former model donned a pair of nude So Kate pumps, a pointed-toe style with a patent finish and a nearly 5-inch heel, available at Neiman Marcus for $695.

In honor of #BlackHistoryMonth , students from @Cornerstoneschoolsdc joined us at the @WhiteHouse to watch the inspirational film Hidden Figures and participate in a discussion with @NMAAHC about the vital role African American women played in the @NASA space program.

She also wore the same look earlier in the day when standing beside her husband President Donald Trump as he spoke at the White House. The president spoke about his Senate impeachment acquittal in the East Room of the house.

When it comes to heels, FLOTUS frequents styles from Louboutin in addition to Manolo Blahnik’s BB pumps; she has also been spotted in pairs from Roger Vivier, Gianvito Rossi and Victoria Beckham.

Click through the gallery to see more of Melania Trump’s top shoe styles.