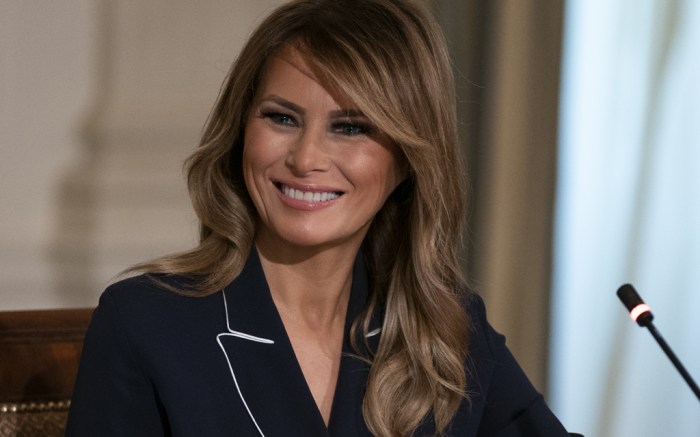 For a White House meeting today, Melania Trump rewore a jumpsuit she debuted on a trip to Japan last year.

The 50-year-old first lady was clad in a navy silk jumpsuit by Loro Piana. The one-piece has white piping at the cuffs and lapels; it initially retailed for $3,500 but is now sold out. Trump wore it cinched in at the waist with a narrow white belt.

For footwear, the former model opted for her go-to Manolo Blahnik BB pumps. Introduced more than 10 years ago, the BB pump was inspired by the French film star Brigitte Bardot.


The silhouette has a low-cut vamp and topline with a pointed toe and a 4-inch stiletto heel. On Nordstrom.com, the shoes are available to shop for $625 and up, depending upon colorway, height height and fabrication.

The Manolo Blahnik BB is a favorite shoe choice of Trump’s, as is the Christian Louboutin So Kate. But the first time Trump wore her Loro Piana jumpsuit, she opted to team it with flats rather than her go-to stilettos. While visiting the Mori Building Digital Art Museum in May 2019 alongside Japanese first lady Akie Abe, Trump opted for pointed-toe navy flats with a buckle accent from Roger Vivier. She styled the jumpsuit with a chunky navy belt, rather than the skinny white one she went with today.

With regard to apparel, Trump often can be found in designer duds from a mix of European and American labels such as Gucci, Dolce & Gabbana, Michael Kors and Carolina Herrera. While she mainly steps out in either her Manolo Blahnik or Christian Louboutin pumps, she also owns heeled styles from the likes of Victoria Beckham, Gianvito Rossi and Christian Dior, as well as flat shoes from Louboutin and Aquazzura. Although she typically selects luxury footwear, the first lady has from time to time gone with more affordable pairs from brands such as Adidas, Timberland and Zara.

Below, we’ve rounded up some pumps that offer a similar look to Trump’s pair, but come in at a lower price point.

Click through the gallery for a look at more of Melania Trump’s statement shoe style.