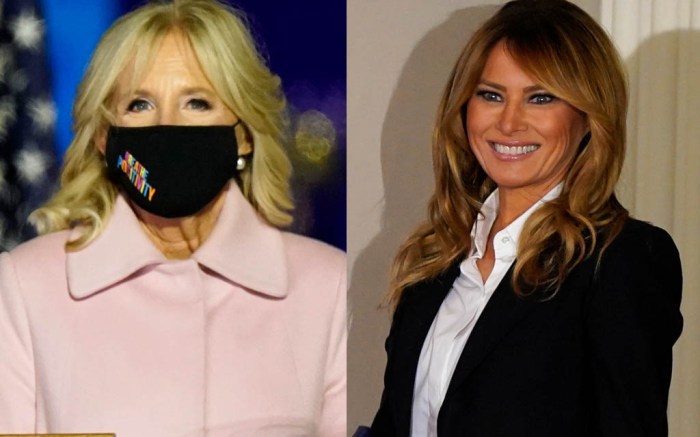 They say actions speak louder than words — but so does style.

While the country continues to wait — and stress — over the results of the U.S. election, the attire worn by the wife of Democratic nominee Joe Biden, Dr. Jill Biden, and first lady Melania Trump Tuesday night can provide the country with clarity on how both camps might be feeling.

As the votes were being counted and many Americans were overcome with an overwhelming sense of anxiety, former vice president Biden stepped out with his wife by his side at a drive-in gathering in Wilmington, Del. In his speech, Biden expressed confidence in the election, but it was Jill who seemed to provide a bit of peace. The teacher and professor opted for a pale pink coat that was soft, and quite literally, warm. The look was simple, yet approachable and emoted a sense of tranquility during such an uncertain time.

Jill paired the coat with black gloves and wore a face mask amid the ongoing coronavirus pandemic. Biden also kept it simple, wearing a suit. He chose not to wear a coat or gloves like his wife.

Later, President Donald Trump addressed his supporters at the White House. In his speech, Trump — like Biden — expressed his confidence. He claimed to have already won the election and asserted that he would be going to the U.S. Supreme Court as he wanted “all voting to stop.”

With her outfit choice, Melania seemingly wanted to appear assertive. She sported a black Dolce & Gabbana pantsuit paired with a white button-up top. Melania pulled the ensemble together with black pumps.

The president opted for a “business as usual” vibe as he sported a blue suit and blue tie.

Melania’s 2020 election night look was much different from the white Ralph Lauren jumpsuit she sported in 2016. The former model looked excited and ready for a new beginning in the $4,000 ensemble paired with nude pumps, whereas this time around, she appears to have taken a no-nonsense approach in black.

Jill, however, has remained true to her signature delicate style. When former President Barack Obama won in 2008, Jill sported a yellow tweed suit that felt fresh and hopeful. She also wore nude pumps.