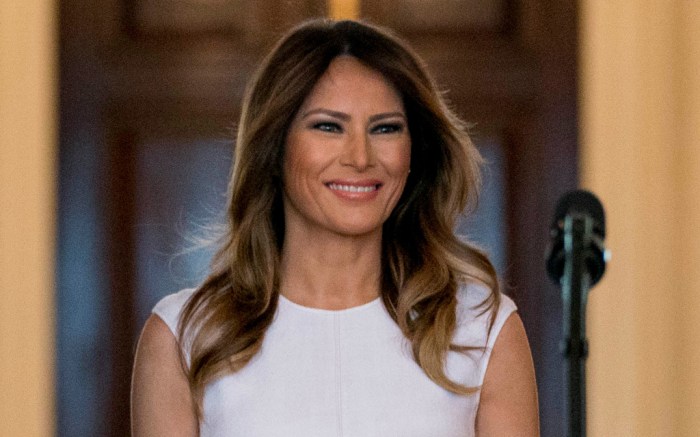 The 50-year-old first lady today shared a video from the White House to recognize the hard work done by moms. In the clip, Trump sported a pale pink dress from Gabriela Hearst. The midi dress has cap sleeves, a pleated skirt and an exposed zip fastening in a rose gold hue. While the dress is now sold out, it previously retailed for $2,000. Trump’s footwear was not visible in the clip.

On this Mother’s Day, let’s recognize all the mothers, grandmothers & motherly figures for their wisdom, love & commitment to their children & families. Take time today to thank a mother & let her know how much you appreciate her! Happy #MothersDay!

Although Trump has a wardrobe filled with designer duds aplenty, she has actually worn the same dress before. At the 2018 Governors’ Spouses’ Luncheon, held in the White House’s East Room, the first lady sported the same style as she gave a speech and entertained the governors’ wives and husbands.

Trump is known for sporting designer brands such as Dolce & Gabbana, Gucci and Prada. When it comes to her shoe wardrobe, the former model is a big fan of pointed-toe pumps with a stiletto heel; specifically, she often can be found in either Christian Louboutin’s So Kate or Manolo Blahnik’s BB. Additionally, Trump has been spotted in more accessibly priced footwear from the likes of Zara, Adidas and Timberland while living at 1600 Pennsylvania Ave.

During the pandemic, the first lady has made few ventures outside of the White House, but she made an appearance on the National Mall in Washington, D.C. on Friday for a VE Day commemoration. Trump wore an Altuzarra double-breasted gray coat and all-black BB pumps for the occasion.

Click through the gallery to see more of Melania Trump’s statement shoe style.