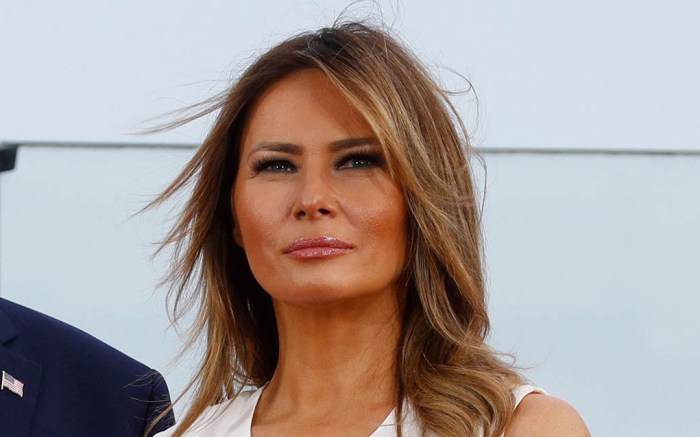 Melania Trump stayed on theme for this year’s Fourth of July festivities in Washington D.C. The first lady and her husband, President Donald Trump, hosted a large event celebrating Independence Day on Saturday, which included a speech from Trump, fireworks and a military fly-over.

Melania, sans face mask, wore a white tea-length dress for the occasion, which she paired with matching white pointed-toe flats and an Azzedine Alaïa red belt for a pop of color.

Last year, Melania marked July 4 with a celebration at the Lincoln Memorial not wearing the red, white and blue tradition. Instead, she opted for a Carolina Herrera dress with multi-colored stripes and sky-high hot pink pumps from Christian Louboutin.

For the Fourth of July in 2018, the former model went for a classic red, white and blue look featuring blue and white gingham dress by Ralph Lauren, Christian Louboutin red pointed-toe flats and a red bow belt by Alexander McQueen.

This year, the Trumps celebrated Independence Days with multiple events, including their Mount Rushmore appearance in South Dakota on July 3. There, Melania wore a $3,840 asymmetric Alexander McQueen dress that garnered many opinions on social media. She completed the ensemble with her go-to Louboutin black patent leather pumps.

The sleeveless, ivory linen, round-neck midi dress featured a Dancing Girls print that came from sketch designs made by students at Central Saint Martins in London. Twitter users likened the look to drawings and immediately mocked the spring ’20 look, saying Trump drew on it with a Sharpie marker.

Donald Trump got bored and drew all over Melania's white dress with a sharpie on Air Force One pic.twitter.com/iFQ0C8VI7i

Looks like Trump enjoyed the flyover, lol. And it also looks like he did the design on Melania's dress with a Sharpie. pic.twitter.com/mjh6b8Gu8A

To see more Fourth of July fashion through the years from first ladies, click through the gallery. And keep scrolling to shop similar white flats Melania wore over the weekend.