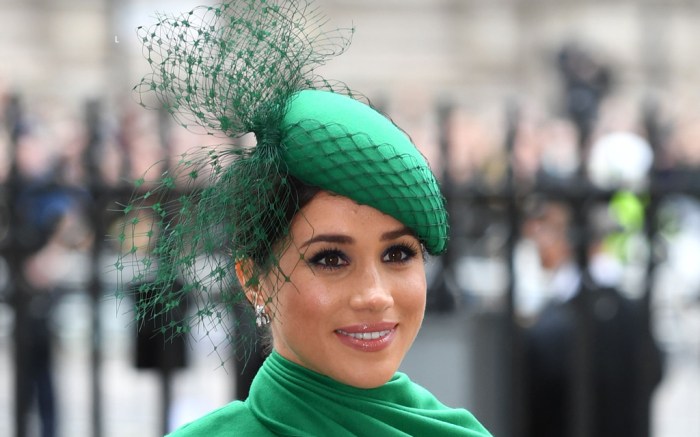 Meghan Markle and Prince Harry made their final appearance as senior members of the royal family on Monday.

The Duchess of Sussex arrived at the annual Commonwealth Service at Westminster Abbey wearing striking shades of green, from her feather and net-adorned William Chambers fascinator to her forest green handbag. Her Emilia Wickstead dress featured a pleated one-shoulder cape over a long-sleeve midi-length frock. The Duke of Sussex echoed his wife’s color choice in a blue suit that was lined with matching green satin.

The 38-year-old braved the cobblestone walkway in pointed-toe pumps. Featuring a 4-inch stiletto heel, the nude version of the Aquazzura Purist style is currently unavailable but similar colorways retail from $650 to $695.

Commonwealth Day is a ceremonial event that celebrates the Commonwealth of Nations and is held on the second Monday in March. The holiday is observed by citizens in the United Kingdom, Canada, Gibraltar, Belize and the Bahamas, with similar holidays occurring in Australia.

The service today marks the last official royal appearance that the Duke and Duchess will make after their Jan. 8 announcement that they would be stepping back from their duties as senior members of the British royal family. They are expected to return to their home in Canada, where their 10-month-old son, Archie, has been staying throughout the duration of their trip to the U.K.

The couple will relinquish their titles of His/Her Royal Highness on March 31, and they also will no longer receive any public funds. Frogmore Cottage, near Windsor Castle in London, will remain their residence in England, but they will be repaying the $3 million of taxpayers’ money that they spent to renovate the property.

To get royal style like Meghan Markle’s chic heels, check out these similar nude pumps.

Click through the gallery to check out more of Meghan Markle’s chic shoe style.

Prince Harry and Meghan Markle Are Officially Done With Royal Life — So How Will They Make Their Money?