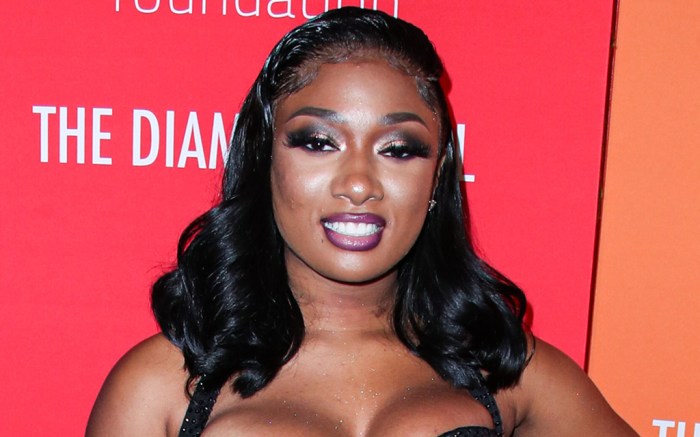 Megan Thee Stallion returned to the concert stage in style this weekend.

The “WAP” rapper put on an hour-long set during a live-streamed virtual show on Saturday in all-out style, meaning a full setlist, advanced choreography and background dancers to tout. For the show, the 25-year-old made sure to stand out in a jewel-encrusted corset and bustier bodysuit; the black mesh number matched perfectly with her white fishnet tights and sheer black thigh-high stockings as well.

The finishing touch of the already bold look came with the musician’s choice of shoes. Her embellished boots ran up the length of her leg in with a form-fitting finish and a crystal clear heel; the pair featured a rainbow gem coating for a wow-worthy appeal as well.

While her music career is launching off the charts, Megan Thee Stallion also racked up a series of high-profile deals in the fashion industry. She previously starred in Puma’s campaign to promote its Cali Sport sneaker back in November 2019 as well as inked a deal with Fashion Nova for spring ’20; the 5-foot-10 star’s collection offers jeans for taller frames. Additionally, the rapper made an appearance in Rihanna’s Savage x Fenty lingerie brand’s summer ’20 campaign.

She also serves as a judge on HBO Max’s “Legendary” which premiered on the platform in May; the series is a voguing competition inspired by the underground ballroom community. With members from different “houses” competing for a $100,000 prize, Megan The Stallion serves as a judge for the battles alongside actress Jameela Jamil, celebrity stylist Law Roach and dancer Leiomy Maldonado, also known as the “Wonder Woman of Vogue.”

Click through the gallery to see more stars who love their thigh-high boots just like Megan Thee Stallion.