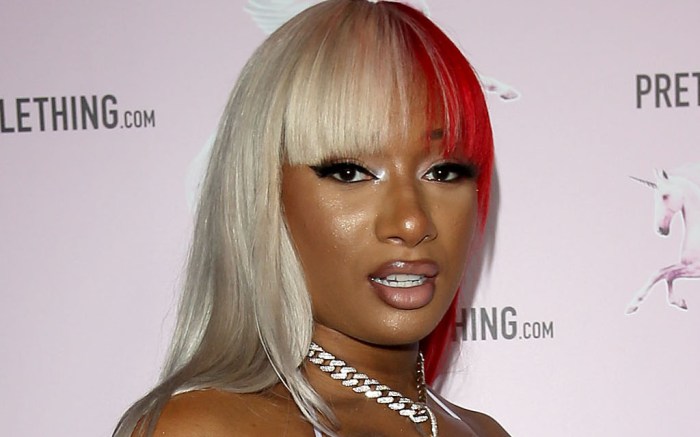 Megan Thee Stallion has given herself a new nickname: “Coach Meg.”

The rapper joked about the new name as part of her campaign for the brand Coach as shared on her social media accounts yesterday. The “Savage” mastermind previewed her photoshoot with the brand on her Instagram Stories as she gave fans a look at her head-to-toe denim outfit that included a bralette and cutoff shorts. The ensemble also highlighted a chain crossbody bag coated with Coach’s logo in a matching blue shade — similar silhouettes retail anywhere from $350 to $595 at Coach.com.

On her feet, the “Legendary” judge continued the all-denim feel with her choice of smooth suede sandals. The silhouette resembles the towering 4-inch Portofino heels from Gianvito Rossi with their adjustable, rounded buckle closure and elongated heel counter. Similar colorways to Megan Thee Stallion’s pick typically retail for $815 but can be found on sale for $489 courtesy of MyTheresa.com.

While her music career is launching off the charts, Megan Thee Stallion also racked up a series of high-profile deals in the fashion industry. She previously starred in Puma’s campaign to promote its Cali Sport sneaker back in November 2019 as well as inked a deal with Fashion Nova for spring ’20; the 5-foot-10 star’s capsule offers jeans for taller frames. Additionally, the rapper made an appearance in Rihanna’s Savage x Fenty lingerie brand’s summer ’20 campaign.

She also serves as a judge on HBO Max’s “Legendary” which premiered on the platform in May; the series is a voguing competition inspired by the underground ballroom community. With members from different “houses” competing for a $100,000 prize, Megan The Stallion serves as a judge for the battles along with actress Jameela Jamil, celebrity stylist Law Roach and dancer Leiomy Maldonado, also known as the “Wonder Woman of Vogue.”

Flip through the gallery to check out even more of Megan Thee Stallion’s best and boldest looks over the years.