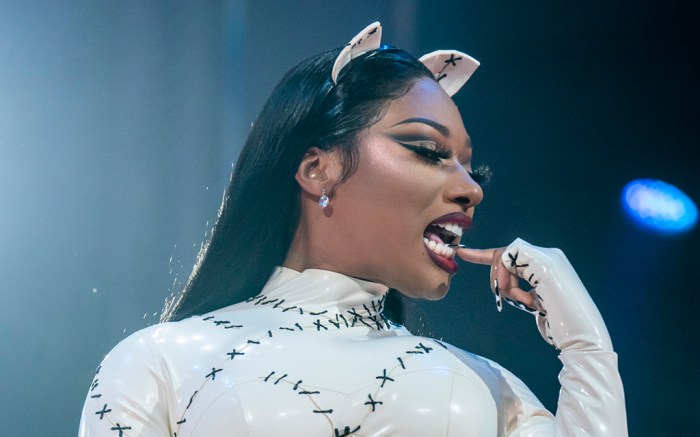 Today, the rapper appeared on an episode of HBO Max’s “Legendary” alongside Winnie Harlow and more. The 25-year-old entertainer opted for a cat-inspired costume for the show, daringly layering a form-fitting white cross-stitch catsuit under a matching corset. She then slipped a set of heeled white thigh-high boots that feature a sleek vinyl material and pointed-toe finish.

The outfit was tied together with an addition of a courageous whip and elongated cat tail.

This Pussy got power 😼 NEW EPISODE OF @legendarymax OUT NOW

“Legendary” premiered in May and is a voguing competition series inspired by the underground ballroom community. With members from different “houses” competing for a $100,000 prize, Megan The Stallion serves as a judge for the battles along with actress Jameela Jamil, celebrity stylist Law Roach and dancer Leiomy Maldonado, also known as the “Wonder Woman of Vogue.”

Megan Thee Stallion recently took the stage at the 2020 BET Awards for a performance of her hit single “Savage.” Surrounded by backup dancers in a desert setting, the Texas native modeled a bondage-inspired look from Ashton Michael; best known for his time on Netflix’s “Next In Fashion” series, the designer has created on-stage looks for Lady Gaga, Christina Aguilera, Camila Cabello and Beyoncé amongst others.

Did you catch my performance tonight!?

While her music career is launching off the charts, Megan Thee Stallion also racked up a series of high-profile deals in the fashion industry. She previously starred in Puma’s campaign to promote its Cali Sport sneaker back in November 2019 as well as inked a deal with Fashion Nova for spring ’20; the 5-foot-10 star’s capsule offers jeans for taller frames. Additionally, the rapper made an appearance in Rihanna’s Savage x Fenty lingerie brand’s summer ’20 campaign.

Flip through the gallery to find J-Lo, Ariana Grande and more stars who love their thigh-high boots.