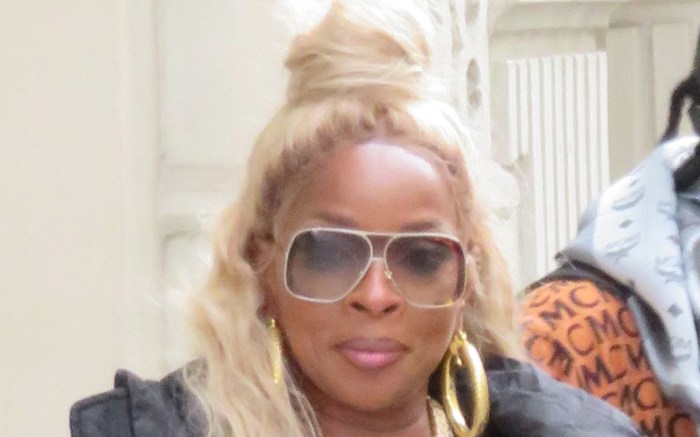 Mary J. Blige broke out her most beloved footwear silhouette on the scene in New York this week.

Spotted on set with rapper Rhapsody, the “Be Without You” singer stunned in a stylish black and gold look, all from MCM x Misa Hylton capsule collection — the theme of the afternoon. Blige’s look tucked a plunging black bodysuit into matching skinny jeans with an emblem-accented belt; the outfit came complete with a 2000s-style chain necklace and oversize hoop earrings.

As for footwear, the singer slipped her feet into an impressive pair of thigh-high boots from the German brand; the shoes covered the length of her legs in the label’s signature logo in a camel shade of smooth leather fabric. The slouchy design included a stiletto lift and a trending ankle chain adornment over the top.

The rare boots fall in line with the “Mudbound” actress’ typical footwear choices. In May of last year, she modeled a similar silhouette from the brand at the 2019 Tribeca Film Festival MCM premiere of “The Remix: Hip Hop X Fashion” in New York. Coming in an all-black iteration, she teamed the boots to a leather mini dress for the event.

Beyond MCM boots, you can also find Mary J. Blige in designs from Jimmy Choo, Le Silla, DSquared2 and more top brands when it comes to footwear. As for apparel both on and off the red carpet, the singer’s closet includes pieces from the likes of Gucci, Louis Vuitton, Cushnie et Ochs and Tom for amongst others.

Over the years in the spotlight, Blige has also been tapped to star in campaigns for a series of the biggest names in the business — think MAC Cosmetics ads alongside Sir Elton John. She also launched her own record label as well as her own perfume and sunglasses lines and has had ties to Reebok, Air Jordan, The Gap, Target and more.

Click through the gallery to see more of Mary J. Blige’s best looks through the past decades.