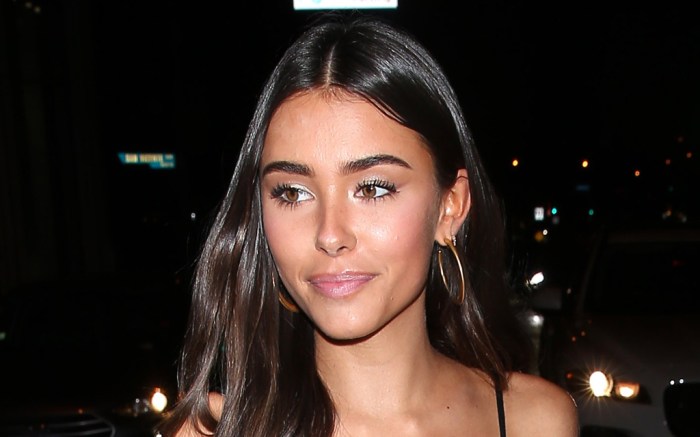 Madison Beer looked straight out of decades past in her new “family portrait.”

Wearing an ensemble inspired by trends of the 1990s and early 2000s, the “Selfish” singer posed for a mirror selfie with her brother and a friend as seen on Instagram earlier today. Beer decided on an oversize sweatshirt inspired by the animated character “Betty Boop” to wear over her pleated black mini skirt; similar sweatshirts from Trevco retail for just $27 at Walmart.com.

As for footwear, the media personality then gave the look an edgy twist with her chunky combat boots; the lifted lug-sole pair resembles styles from Prada that retail for $1,200 courtesy of Saks.

When she isn’t wearing chunky boots, you can oftentimes spot the 21-year-old in her go-to Nike sneakers. The brand’s Air Force 1 ’07 sneaker first hit shelves in the 1980s and has since become a cultural icon and must-have footwear style for Gen-Z; from “Stranger Things” actress Millie Bobby Brown to TikTok star Addison Rae, these affordable and easy-going sneakers can be found in a variety of street-style inspired looks from the younger generation.

Beer opted for an all-white take on the pair, available for $90 at Nike.com, when she stepped out earlier this week in Los Angeles. She matched the bright white of her shoes to her cropped camisole, contrasted by a coordinating pink tie-dye sweatshirt and sweatpants set. Again in July, the influencer decided on the Nike kicks to balance out her biker shorts and crewneck sweatshirt look in Hollywood, Calif.

Beyond low-top Nike sneakers and chunky lug-sole boots, Madison Beer loves to loop in designer duds from the likes of Chanel, Louis Vuitton and Redemption; her everyday style also includes more affordable pieces from Brandy Melville, Levi’s, Converse, Wrangler and more. In addition to her own personal fashion repertoire, Beer can be found on the front row for major fashion shows such as Off-White and Ralph & Russo as well as in ad campaigns for American Eagle, Missguided and ASOS.

Click through the gallery to find more stars who dared to wear boots in the heat of the summer.