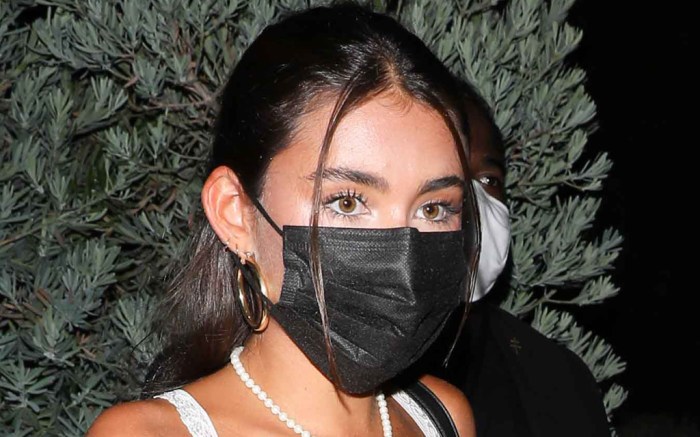 Madison Beer joined Charli D’Amelio and a few other Gen-Z stars for an event in Los Angeles last night.

For the occasion, Beer opted for a relaxed look as she matched a lacy cutout crop top to light-wash mom jeans, looping in a pop of color with her chunky sweater.

The “Baby” singer lifted her look with a set of platform shoes from Dr. Martens. The 8053 patent leather brogues came with smooth uppers and signature exposed stitching, all set with a lace-up 5-eye front. Giving Beer a 1.5-inch height boost, the pair retails for $155 on the brand’s website.

Following Beer out of the event was none other than TikTok star Charli D’Amelio. The 16-year-old kept with the same outfit combination as her fellow guest in a white crop top and mom jeans; D’Amelio’s take on the look included a long-sleeve finish and a ripped knee detailing, all giving an edge to her purple-dyed hair.

As for the media personality, her footwear of choice also came in the form of black chunky footwear, as seen through her lifted booties with a lug-sole finish and block heel design.

When the two stars aren’t in grungy footwear, they both prefer one sneaker silhouette in particular from a recognizable brand. The Nike Air Force 1 ’07 first hit shelves in the 1980s and has since become a cultural icon and must-have footwear style for Gen-Z; from “Stranger Things” actress Millie Bobby Brown to TikTok star Addison Rae, these affordable and easy-going sneakers can be found in a variety of street-style inspired looks from the younger generation.

In addition to low-top Nike sneakers and lifted boots, Madison Beer herself loves to loop in designer duds from the likes of Chanel, Louis Vuitton and Redemption. In general, the “Selfish” singer’s everyday style leans more on the relaxed side than her red-carpet-ready looks; her outfit rotation includes more affordable pieces from Brandy Melville, Levi’s, Converse, Wrangler and more. On top of her own personal fashion repertoire, Beer can be found on the front row for major fashion shows such as Off-White and Ralph & Russo as well as in ad campaigns for American Eagle, Missguided and ASOS.

Click through the gallery to see more stars who love their Doc Martens boots just like Madison Beer.