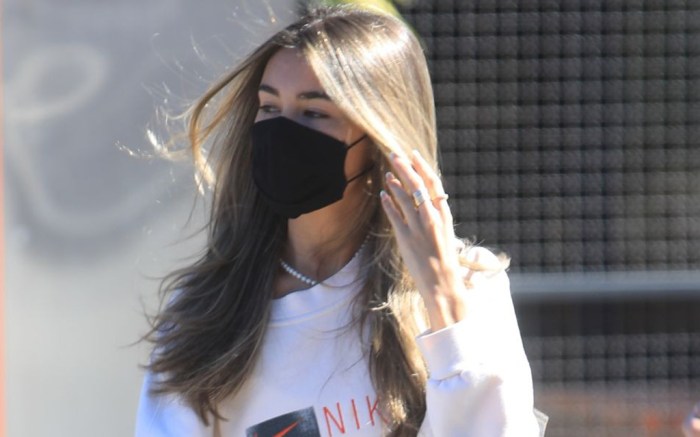 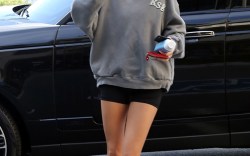 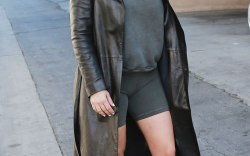 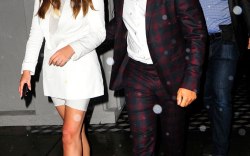 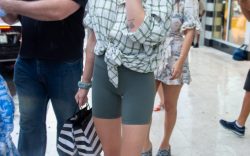 The “Unbreakable” singer anchored her athleisure look with AF1s as she left her hair salon in West Hollywood, Calif. on Saturday.

Beer was gym-ready in a logoed crewneck sweatshirt from Nike, which she teamed with black bike shorts. She accessorized with an all-black face mask and a strand of pearls, as well as white crew socks.

Long a staple for workouts, the bike short has become a lifestyle favorite of celebrities and fashion editors in recent years. The silhouette, which can be considered summer’s answer to the ever-popular legging, can be styled with everything from a blazer and boots to a crop top and heels. (Of course, Beer’s styling choice was a more athletic-inspired one.)

Launched in the ’80s as a basketball shoe, the AF1 has become a lifestyle favorite for many, finding its way onto the feet of “It” girls such as Bella Hadid, Emily Ratajkowski and Kendall Jenner in addition to Beer. The style has also been a canvas for collaborators including Virgil Abloh and Travis Scott. Beer selected a straightforward all-white version of the classic sneaker for yesterday’s excursion.

When she’s not in her beloved Air Force 1s, Beer can often be found in accessibly priced footwear from Dr. Martens and Air Jordan, as well as designer kicks from Balenciaga and Dior. Unsurprisingly, the “Louder Than Words” star likes to glam up for the red carpet, having previously selected heels from the likes of Tamara Mellon, Stella Luna, Stuart Weitzman and Jimmy Choo. Beer puts together her glamorous red carpet looks with the assistance of celebrity stylist Maeve Reilly, who also works with Hailey Baldwin, Ciara, LaLa Anthony and Tinashe, to name a few.

In the fashion space, Beer has appeared in ad campaigns for American Eagle and Missguided, the latter of which she partnered with on a collection in 2018. In addition, the “Selfish” hit maker has sat front row at runway shows for top brands such as Off-White, Cushnie et Ochs, Ralph & Russo and Balmain.

Below, we’ve rounded up some pieces to help you achieve a similar look to Beer.

Click through the gallery to see how more celebrities style their bike shorts, such as Hailey Baldwin, Emily Ratajkowski and Chrissy Teigen.