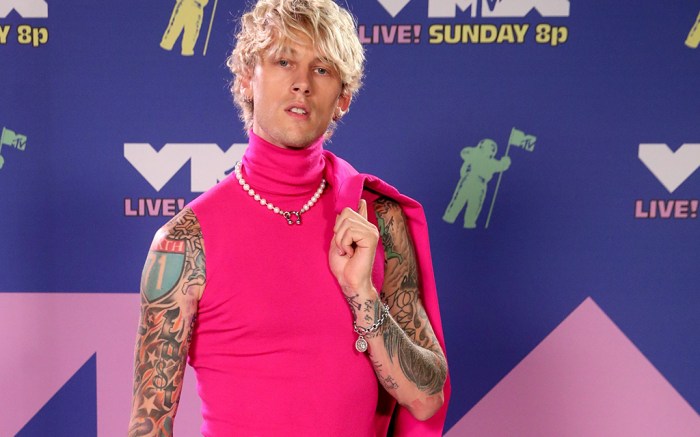 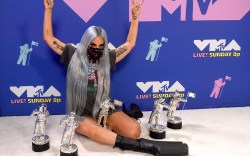 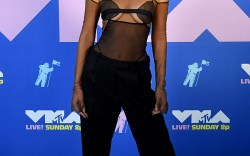 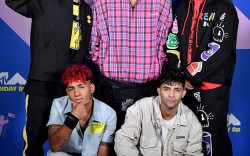 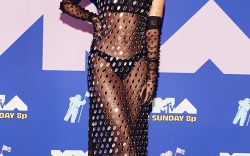 Machine Gun Kelly broke out one of his brightest looks to date to receive a Moon Man at the 2020 MTV Video Music Awards.

The “Bloody Valentine” rapper took home the award for Best Alternative Video at last night’s show, accepting the honor in a three-piece suit from Berluti. His twist on tailored dressing included a hot pink combination of a turtleneck tank top, pleated trousers, a blazer and a gold-accented pearl necklace.

The final kicker of the look, beyond his already bold apparel and accessories, was his choice of footwear. MGK opted for heeled pointed-toe dress shoes, set with a patent leather finish and a lifted platform front.

It’s only the #VMAs pre-show and @machinegunkelly already won Best Alternative 🚀🚀🚀 His performance is coming up, and then the 2020 @vmas bring the music at 8p!

Slipped a love letter into the #VMAs virtual video booth for @machinegunkelly and I’m not sure he found it….. but that’s ok 🥰

Stars like Machine Gun Kelly himself along with Harry Styles, Jason Momoa, Billy Porter and more have turned standards of footwear on its head with their lifted shoes. More and more male celebrities are looping in heeled footwear and more designers have started including these styles in their collections. Swae Lee and Giuseppe Zanotti collaborated in February for a collection of lifted men’s shoes, for example. Brands such as Rick Owens, Christian Louboutin and Jimmy Choo included men’s heels in their collections for fall ’20 as well.

pretty much waited my entire life just to say: WE WON A FUCKING VMA!!!! 🤯🔥🙏🏼 i was flying in to pick up my fathers ashes when i got the news that we were nominated, so it was bittersweet. then i found out that it was a fan voted award and from the first day y’all were like “we got this” and you really did it. i’m honored to share this moment with you. thank you. thank you. what the fucking fuck. @vmas @mtv

Machine Gun Kelly has never been one to shy away from a bold ensemble. As for personal style, the rapper’s outfits include everything from relaxed Vans sneakers and Dr. Martens combat boots to Off-White x Air Jordan kicks and even an oversized shirt-dress from 1017 ALYX 9SM’s fall collection. He was also chosen as the face of John Varvatos campaign in 2017 in addition to signing on as a Reebok ambassador in the same year.

Click through the gallery, to see all the 2020 MTV VMAs red carpet arrivals.