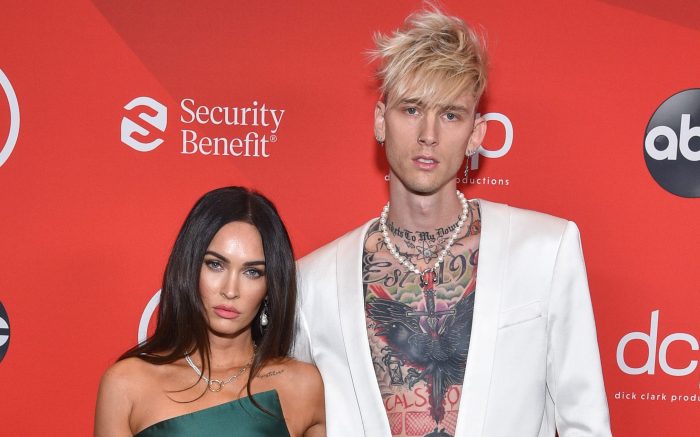 Machine Gun Kelly and Megan Fox have made their red carpet debut as a couple in style at the 2020 American Music Awards.

On Sunday, Kelly arrived at the Microsoft Theater wearing a retro-like silk white ensemble by Balmain. The top of the look featured a blazer with a plunging neck line, which he paired with loose fitting trousers. He accessorized the outfit with a pearl necklace and dangling earrings.

On his feet, the rapper opted for a pair of silver ankle aviator boots from Dsquared2’s spring collection. The boots featured a zip-up closure and a black rubber outsole. Kelly wore the boots slightly un-zipped , giving the look a relaxed effect. His silk pants were also tucked in the boots.

As for Fox, the “Transformers” star looked stately in an emerald green asymmetrical top with an A-line skirt by Azzi and Osta. The actress paired the look with diamonds, a black clutch and black sandal heels by Giambattista Valli.

The sandals added an edgy twist to Fox’s regal look as they featured a bulky gold chain strap.

Later in the evening, Fox will be presenting an award while Kelly will perform during the ceremony for the first time ever.