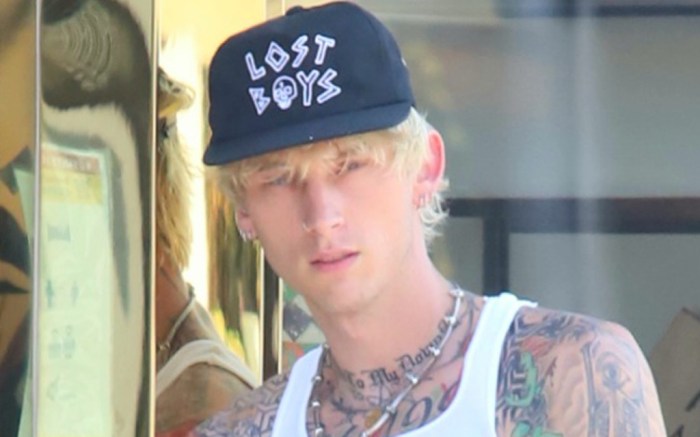 Retro trends are having a moment in the womenswear world and Machine Gun Kelly just proved that vintage style is making a comeback in men’s fashion, as well.

MGK’s choice of footwear then sealed the deal on his vintage-style look. The chunky combat boots come from none other than Dr. Martens, one of the 1990s most beloved brands. With its signature stitched outsole and smooth leather uppers, the rapper’s pair not only evoked 90s appeal but also included special details that pay tribute to a global music symbol of the 1970s and 1980s, the CBGB club in Manhattan. The special edition pair of Dr. Marten 1460 boots launched in honor of the silhouette’s 60th anniversary and includes the club’s name displayed across the toe in white lettering.

The pair is still available in limited sizes for $80, half-off its original price of $160, at DrMartens.com.

As seen by his look on Tuesday, Machine Gun Kelly is not one to shy away from a bold ensemble. Earlier this month, “The Dirt” actor stepped out in Los Angeles once more wearing a cherry red look that matched a leather jacket to ripped-knee zebra-stripe pants and black leather boots.

As for personal style, the rapper’s standout attire does not go unmissed. His outfits include everything from relaxed Vans sneakers to Off-White x Air Jordan kicks and even an oversized shirt-dress from 1017 ALYX 9SM’s fall collection. He was also chosen as the face of John Varvatos campaign in 2017 in addition to signing on as a Reebok ambassador in the same year.

Check out the gallery to see even more stars who love their Dr. Martens boots.