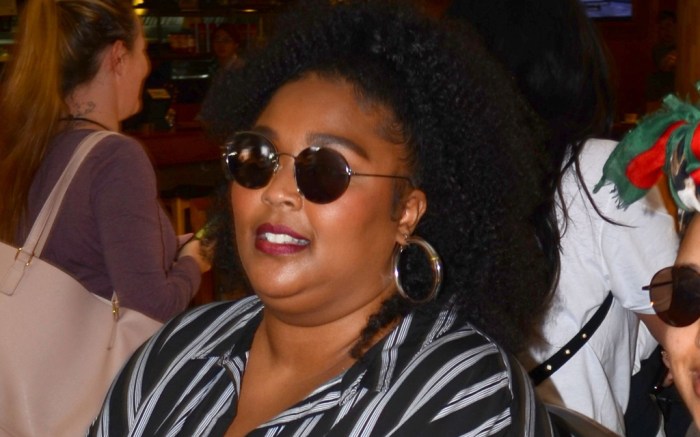 Lizzo used her mega Instagram following to help get out the vote in the most stylish way.

The “Truth Hurts” singer took to the social media app to encourage her fans to vote during this election season in a look that caught their eyes. Lizzo’s custom Christian Siriano outfit included a twist on a three-piece suit in a red and white checkered bandeau layered with a pencil skirt and cropped jacket.

On her feet, the Grammy Award-winning artist opted for low-dipping white $395 Stuart Weitzman mules with a pointed-toe finish and mid-height heel.

The singer wrote in the caption: “As we honor the rights our predecessors dreamed of let us be leaders for the next generation. We’ve come too far to give up now. Are you ready to vote?”

Today is dedicated to our leaders who’ve paved the way. Where would we be without our pioneers? As we honor the rights our predecessors dreamed of let us be leaders for the next generation. We’ve come too far to give up now. Are you ready to vote? Text LIZZOBEVOTING to 26797 to make sure you’re registered to vote, confirm your polling location, and get reminders for all your elections. #iamavoter

The Instagram post this morning wasn’t Lizzo’s first time promoting voting for her almost 10 million followers. During the 2020 Billboard Music Awards, she opted for a custom Christian Siriano dress coated in the word “Vote” which she shared on social media after.

She also gave her twist on Uncle Sam’s style in a patriotic tophat, an American flag bustier and a suit jacket earlier in the month in another attempt to boost voter turnout.

IM SO EXCITED THAT WE ALL GETTING READY TO VOTE! IMA TREAT THIS SHIT LIKE HALLOWEEN AND GET ALL DRESSED UP TO CELEBRATE OUR RIGHT WE FOUGHT SO DAMN HARD FOR! #iamavoter

Auntie Sam out here doin what she gotta do to get y’all to vote! -Text LIZZOBEVOTING to 26797 to make sure you’re registered to vote, confirm your polling location, and get reminders for all your elections. #iamavoter

When it comes to Lizzo’s style repertoire, the musician’s closet includes a vast variety of hit designer brands. From modeling Marc Jacobs at the Met Gala to performing on stage in Christian Siriano ball gown and custom Swarovski crystal-embellished Stuart Weitzman combat boots, her style is nothing but ordinary. The singer can also be found in campaigns for Absolut Vodka, Khloe Kardashian’s Good American brand and Urban Decay makeup.

Click through the gallery to discover more of Lizzo’s top style moments over the years.