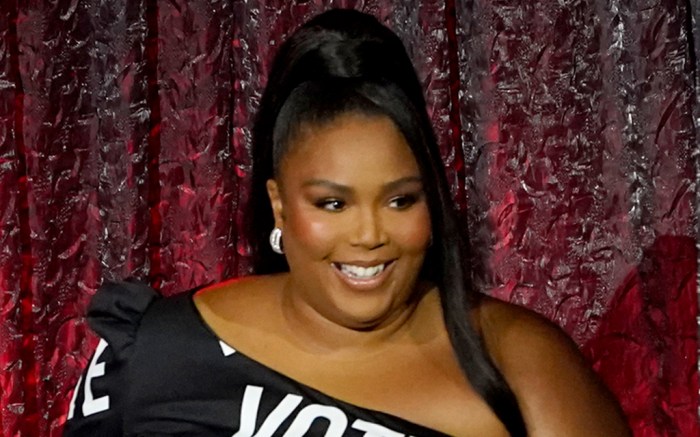 Lizzo took the stage at the 2020 Billboard Music Awards and automatically sent a strong message.

The “Truth Hurts” singer accepted the Top Song Sales Artist award at tonight’s show in a bold one-shoulder mini dress, coated in the word “Vote” ahead of the upcoming November election. The design is a custom take on a gown that debuted during Christian Siriano’s spring ’21 runway show during New York Fashion Week in September; the pull-sleeve full-length version of the gown retails for $3,800 on the designer’s website.

As for shoes, the “Good As Hell” songstress pulled off one of the year’s most unexpected footwear trends: big-toe sandals. Lizzo’s version of the style came in the form of thin-strap black heels with an ankle-wrap detail.

Big-toe silhouettes became a celebrity-endorsed style last summer and have since continued to appear on the likes of Katy Perry, Gabrielle Union and Katie Holmes amongst others.

When it comes to Lizzo’s style repertoire, the musician’s closet includes a vast variety of hit designer brands. From modeling Marc Jacobs at the Met Gala to performing on stage in Christian Siriano ball gown and custom Swarovski crystal-embellished Stuart Weitzman combat boots, her style is nothing but ordinary. The singer can also be found in campaigns for Absolut Vodka, Khloe Kardashian’s Good American brand and Urban Decay makeup.

Click through the gallery to see more of the best on-stage looks from the 2020 Billboard Music Awards.