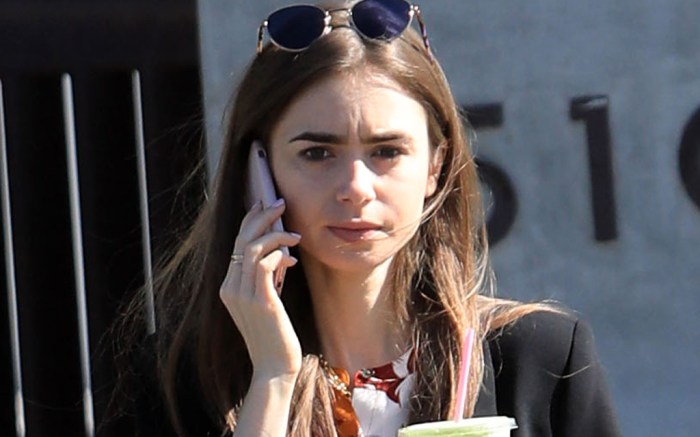 Lily Collins gave fans a glimpse at her more relatable at-home attire this weekend as she attended a virtual Netflix Watch Party.

Taking to Instagram to show off her glam look for the evening on Sunday, Collins modeled a green voluminous top and coordinating satin shorts from Emporio Armani. The “Mank” actress then slipped on the tallest set of $1,125 suede boots from Casadei, lengthening her legs as they hit mid-thigh.

The reality of her look, though, came with the second image from her social media post; the photo showed Collins still in her designer top but now matched to the comfiest $30 Under Armour joggers, tube socks and fuzzy white clogs.

Clogs, like “ugly” sandals and ballet flats, are experiencing a revitalization amongst growing celebrity style trends and footwear favorites; the new appreciation for the classic slip-on style comes with an increased desire for comfort and stability in the fashion world amidst the current environment. Clogs fall in line with the regrowth of loungewear trends, slipper styles and more as influencers turn what once was considered taboo or plebian into the must-have pieces for fall.

As for Collins herself, the clogs tend to remain her at-home go-to — but when it comes to on-camera appearances, her thigh-high boots reign supreme. The Netflix star loves a solid pair of leg-coating shoes, oftentimes favoring those of Saint Laurent’s designs.

The Moon silhouette features corset-style lacing up the back along with a sleek pointed-toe front and a curved block heel. Towering over 4 inches in height, similar Saint Laurent boots can be found for $2,295 at Saks Fifth Avenue.

When she isn’t in dressier designer duds, Lily Collins’ off-duty footwear style includes a mix of labels such as sustainable brand Rothy’s and workout-ready pairs from Brooks Running. The British-American star also serves as an ambassador for Lancôme and has previously starred in ad campaigns for Barrie on top of appearing front row for the biggest names in fashion during Fashion Month — think Chanel, Givenchy,  and Valentino amongst other major designers.

Click through the gallery to discover more of Lily Collins’ impressive style transformation over the years.