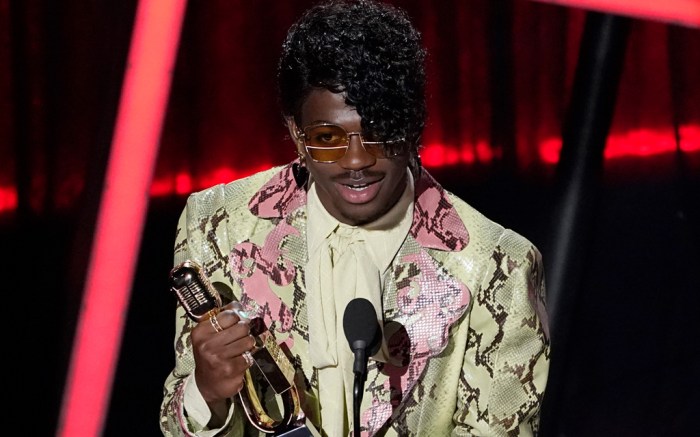 Lil Nas X just nabbed his first Billboard Music Award of the night and did so with style and flair.

The “Old Town Road” musician accepted the award for the Top Hot 100 Song of the year, taking the stage from a safe distance to give his speech. As he walked across the Dolby Theatre mainstage, the rapper showed off his unmissable 1960s-inspired Gucci ensemble.

The final touch of the branded look came in the form of black leather boots; the ankle-height pair featured an almond-shape toe and a patent sheen with an interlocking double G signature accent. Similar designs retail for $980 on Gucci’s website.

The 2020 Billboard Music Awards air live tonight from The Dolby Theater in Los Angeles at 8 p.m. ET on NBC and celebrate the best in the music industry. Kelly Clarkson returns to host the show for her third year in a row and Post Malone leads the nominees with 16 different nods in 15 different categories. Lil Nas X follows suit with 13 nominations, right ahead of Billy Eilish and Khalid both with 12 awards up for grabs.

For the coveted title of Top Artist, the nominees are Taylor Swift, the Jonas Brothers, Billie Eilish, Khalid and Post Malone. Lizzo, DaBaby, Billie Eilish, Lil Nas X and Roddy Ricch are the group up for Top New Artist as well. As for performances, Alicia Keys joins the star-studded lineup that also includes Brandy, Demi Lovato, Bad Bunny, Sia, Post Malone and BTS amongst others.

Click through the gallery to see the best red carpet looks from Billboard Music Awards.