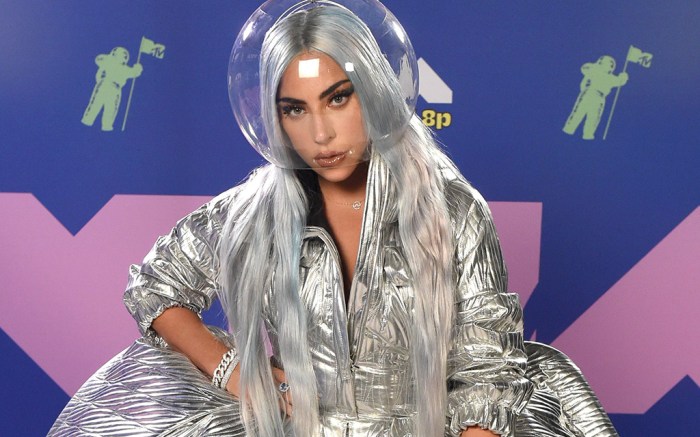 Lady Gaga, ever-true in sync with her wild side, wore one of her most striking looks yet to the MTV Video Music Awards. Dressed in a shiny couture heart quilted parka from Area’s fall collection, the “Rain on Me” singer brought outer space to the red carpet with a custom-made space helmet designed by Conrad by Conrad.

I was wearing face shields before it was a thing 👆🤣 #VMAs

“I was wearing face shields before it was a thing 👆🤣 #VMAs” Gaga joked in her Instagram caption.

Gaga completed the outfit with black faux leather boots from Pleaser Shoes. The boots feature a 9-inch stiletto heel. The shoes retail for $125.

Nominated for nine MTV VMA awards, Gaga will perform her single “Rain On Me” co-written with Ariana Grande. It will be the first time that they’ve performed the song live on stage.

Earlier this month, Gaga announced to her fans that she would be performing at the VMAs in a way that only Gaga could. In a plush pink bathrobe, the “Bad Romance” singer casually sipped a cocktail while wearing an impossibly-large alien-inspired pink mask. Designed by the L.A.-based latex label Venus Prototype, mask was custom-made in a neon pink latex with airbrush detailing and sculpted rubber.

I’ve been at home dreaming of #Chromatica, and it’s finally time to take off for the first live performance 🛸 Tune in to the #VMAs on 8/30! ⚔️💓

If you’re inspired by Lady Gaga’s red carpet black leather boots, shop similar lace-up styles below. And click through the gallery, to see all the 2020 MTV VMAs red carpet arrivals.